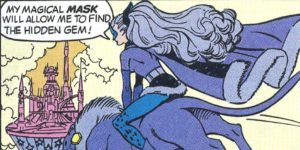 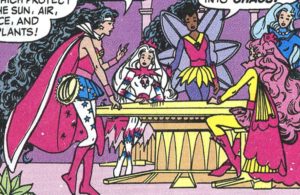 Welcome back to Strange Times & Places, where today we celebrate the release of the surprisingly great Wonder Woman big screen solo outing by looking back at not-so-great attempt to bring Wonder Woman to the small screen, Wonder Woman & The Star Riders!

It, like most other media adaptions, is a Royale with Cheese – some things are just different. Usually, a regular cartoon series/movie wouldn’t qualify as a Strange Time & Place – of course it’s got some differences from the comics, it’s an adaptation not a motion comic – but Wonder Woman & The Star Riders never made it to TV or store shelves. All that exists of it is a single one-shot comic given away with boxes of cereal, the only non-mainstream DCU title of the promo, and a one-shot comic portraying a standalone alternate universe is prime Strange Times & Places material. 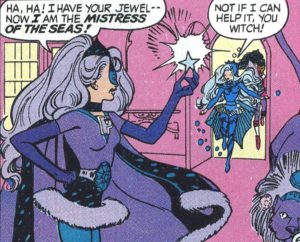 The evil, cat-themed sorceress Purrsia has used her magic to steal the Star Riders’ magic jewels that protect sun, earth, ice, and plants and, as a result, the ice caps are melting and plants are dying. They fail to prevent her theft of the fifth gem, the sea gem, and have to do battle with her to get them all back. They succeed and Wonder Woman’s lasso of truth reveals that Purrsia is good at heart and wants to join the Star Riders…only for her to summon a thunderstorm and steal the sun gem again immediately after being welcome to the HQ. And so the adventure continues…