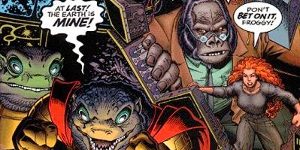 Welcome, friends, followers and family.  It’s time for a new RETRO REVIEW of an independent comic book this week.  So I ventured down into the comic book vault and turned down the independent wing and dug around for a few hours and finally came up with the 1996 Dark Horse Comics comic book, Monkeyman And O’Brien # 1. Well, technically I pulled out the complete mini-series which consisted of just three (3) issues. The comics are cover dated July, August and September 1996.

Here is the front cover of that first issue: 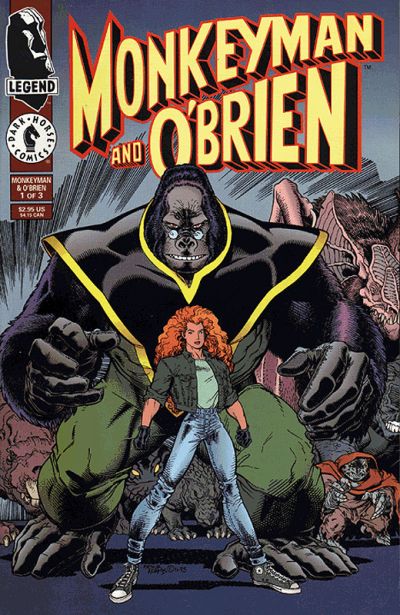 As you can clearly see, the cover. both pencils and inks are by the great Arthur Adams.  In fact, these characters were created by Arthur Adams and all three issues sport covers by Mr. Adams, and not only that, but he also wrote, pencilled and inked all three issues of the mini series.  The comics came out under the Legend imprint from Dark Horse Comics at that time.

Before we get two far into things, here are the other two (2) covers in the mini series, as well: 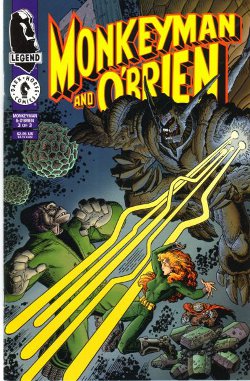 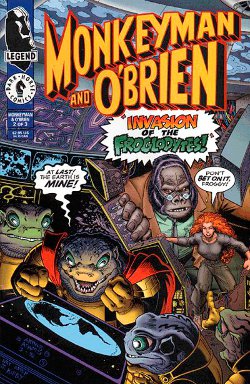 The characters of Monkeyman, who is actually Axwell Tiberius and Ann O’Brien first appeared written and drawn by Adams in 1993, within the pages of Dark Horse Presents # 80.

The characters then showed up during 1994 in back up stories, within Mike Mignola‘s comic mini series entitled; Hellboy: Seed of Destruction.

Then the characters were featured here in the 1996 mini series.  All these appearances were published by Dark Horse Comics.

Monkeyman and O’Brien certainly are similar to DC Comics, Angel and the Ape, being that their is a large monkey/gorilla teamed up with a human female, but the DC series is all about the comedy, where this series is all about the adventure.  While Axwell and Ann may have had the DC ancestors the story is more late fifties, early sixties Marvel Comics.

In fact, the villain in this first issue could be Marvel’s Moleman easily.  In fact both a mole and a shrew are underground burrowing animals.  The story opens with the Shrewmanoid leading a pack of subterranean monsters to the surface of the Earth.  They burst forth in San Francisco and seek destruction and an unearthly energy source.

Of course, it’s Axwelll and Ann who control the energy source, at her missing father’s laboratory.  Of course, Adams then provides a timely two page flashback, explaining how Monkeyman came to be on Earth and is working with O’Brien.

Monkeyman and O’Brien here about the Shrewmanoid’s path of destruction and rush off to head him off, on a classic Jack Kirby Fantastic Car, well, not really, but that clearly is where Adams got his influence for the sky cycle/car he draws.

The good guys (Axwell and Ann) confront the bad guys (the Shrewmanoid and his pack of monsters) and battle is engaged.  The Shrewmanoid comes out on top and then Adams provides another two page flashback so the reader gets to see the Shrewmanoid’s origin, as well.

This first issue ends with Ann & Ax (short for Axwell) surprising the Shrewmanoid and gaining the upper hand.  Hooray for the good guys!  But the issue ends with the final page showing a giant space ship heading directly towards Earth prefacing the coming of the Froglodytes!

As you might tell by the villains, this series is part science fiction and part adventure series, but all fun!  I highly recommend it to you if you like stories with great art and a fun story to go along with it.  Search it out, you won’t be sorry.

I’ll be back next week with a new Fabulous Find, unless the Froglodytes take over the Earth in the meantime!  And check in again in two weeks for another RETRO REVIEW.  Be seeing you …