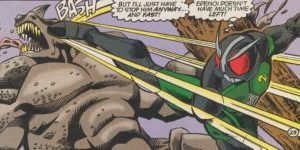 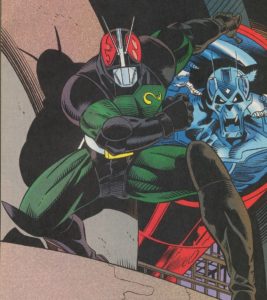 Welcome to Tokusatsu Gesundheit, where this week we once more turn our eyes to the American adaptation of a Toei series – Saban’s Masked Rider!

The teenage Prince Dex is sent from the war-torn planet of Edenoi to protect Earth from the machinations of his megalomaniacal uncle Count Dregon! He and his adorable alien critter, Ferbus, move in with the ethnically diverse Stewart family (white dad, Asian mom, white teen daughter, and black youngest son – explicitly adopted kids) and tries to live as a normal high school student while continuing his battle against Dregon! 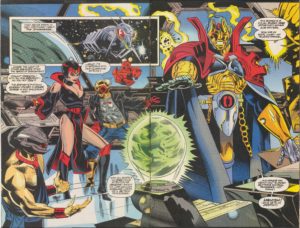 Count Dregon and his do-nothing cronies!

In 1995, Mighty Morphin’ Power Rangers (adapted from Super Sentai) was riding high and VR Troopers (adapted from some Metal Heroes series) was doing pretty darned well as a syndication original – it was only natural for Saban to try adapting Kamen Rider. The last series to air was 1989’s Kamen Rider Black RX and so they went with that (as well as footage from the more recent movies Kamen Rider ZO and Kamen Rider J). Unfortunately, Kamen Rider is a LOT darker than Sentai and features more out-of-costume Japanese people – they required a lot more original footage and unfortunately it became a borderline sitcom as a result.

There was also a one-shot released by Marvel Comics, who held the Power Rangers license at the time. I used images from that to illustrate this article since I didn’t have great quality video on hand.

Watching a few episodes, I can see why Kamen Rider fans hate this series: it feels like a low budget kidcom grafted onto a much better Japanese series. That said, the writing isn’t much worse than contemporary Power Rangers episodes. 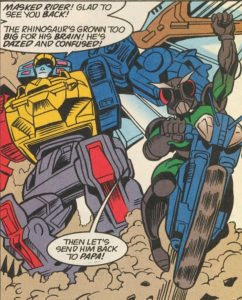 Fun Fact: As a result of this series, Toei ultimately ditched “Masked Rider” as the official translation of “Kamen Rider”. A much better adaption of a later series just stuck with the Japanese name for the heroes.