Welcome back to Scripting Errors, where we look at movies that might have been! In honor of Wonder Woman’s second weekend of box office domination, we go back in time ten years prior to her big screen debut and see how Joss Whedon would have treated her.

Joss Whedon, already nerd royalty for his TV work, turned this draft in on August 7, 2006. A historical context is instructive here: The Dark Knight hadn’t elevated super hero flicks to Oscar buzz fodder yet nor had the one-two punch of Iron Man and The Incredible Hulk kicked off Marvel’s cinematic universe. This was an era when the comic book movie craze kicked off by X-Men in 2000 seemed to winding down, with cinematic disappointments like Superman Returns, Catwoman, and X-Men: The Last Stand starting to outnumber the new classics like Batman Begins. Connected universes and megafranchises were likewise unheard of at the time, meaning each movie stood on its own (or on the shoulders of previous movies based on the same characters). 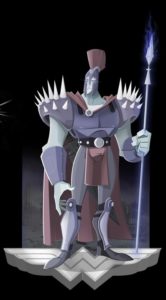 “Hades” by Dan Schoening, standing in here for the similarly described Strife.

A freak hurricane knocks relief aid pilot Steve Trevor out of the sky over Themyscira, the island paradise that plays home to the Amazons. Diana, the princess of the Amazons, is moved by the selflessness of his mission and rescues him from execution in order to accompany him. Their adventures take them from an Albanian refugee camp to the streets of Gateway City, battling the malign influence of the remnants of the Greek pantheon along the way.

The script is fine, with all the witty dialogue one expects from the creator of Buffy The Vampire Slayer, but suffers from being Wonder Woman’s origin told from Steve Trevor’s perspective. It’s really HIS story, not hers. Assuming a low level of changes and studio interference, it likely would have been a solid film that didn’t age all that well rather than an outright disappointment.