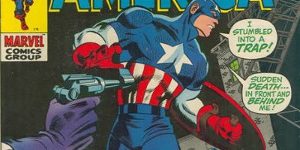 Time once again for a new RETRO REVIEW.  This week I’ve visited the Marvel Comics section of the comic book vault and come out with Captain America # 124.  It is cover dated April 1970 and sports a very nice cover drawn by “Mirthful” Marie Severin with inks by “Joltin'” Joe Sinnott. Take a look: 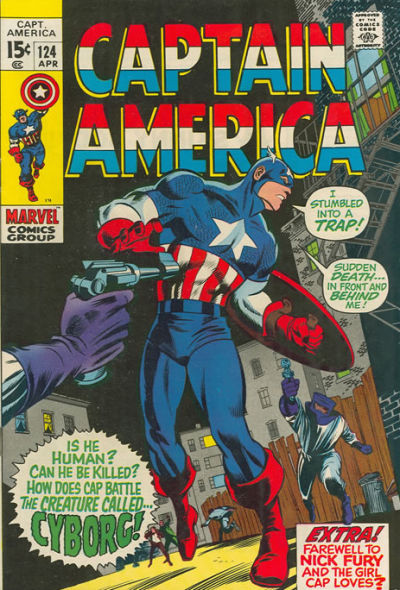 The story is entitled; “Mission: Stop The Cyborg!” and it is written by Stan “The Man” Lee, pencilled by “Gentleman” Gene Colan and inked by the same man that inked the cover, Joe Sinnott.

Things open with a bang, as Cap is attacked by two A.I.M. assassins on the splash page.  For those that do not keep up with Marvel acronyms, A.I.M. stands for Advanced Idea Mechanics.  Cap spends a page and a half defeating the two assassins.  Then the scene switching to A.I.M. headquarters where we find MODOK watching the proceedings via closed circuit television.  Modok, by the way, stands for Mental Organism Designed Only for Killing.  Though over the years the M has sometimes been changed from Mental to Mobile and also Mechanized.  But the original designation was Mental, so I’ll stick with that, thank you.

Lee spends the next three pages on the creation of the Cyborg by MODOK and the A.I.M. scientists.  Next the scene shifts to barber shop entrance into S.H.I.E.L.D.‘s hidden headquarters.  I loved that to get to the underground headquarters Cap and Nick had to sit in the barber chairs and were lowered down into the secret headquarters.  It reminds me of the Man from U.N.C.L.E. entrance which went through a tailor shop dressing room.  Both pretty neat/cool, at least in my opinion.

Cap’s purpose of the visit is to demand that his girlfriend, Sharon Carter, be removed from field duty, so that she willl no longer be in constant danger.  Nick and Sharon reluctantly agree and Cap is happy.  Before Cap can leave, the S.H.I.E.L.D. monitors have picked up a bank robbery by either “a robot or some nut in a halloween suit!” per Fury. Obviously it is the newly created Cyborg!  Before Cap or S.H.I.E.L.D. can do anything the Cyborg makes his escape.

On a funny note, when the Cyborg returns to the A.I.M. hidden headquarters, MODOK tells him to “throw the money away!  It means nothing!”.  You would think that A.I.M. could use it to finance some other operation, wouldn’t you?  But I guess that MODOK is too  focused on destroying Cap.  Apparently MODOK is jealous of Cap’s perfection.

Shortly thereafter, the now desk bound Sharon Carter receives a call from Nick Fury, asking her to contact Captain America and have him meet him somewhere.  Sharon relays the message to Cap, but then Fury himself walks in and Sharon realizes that she has been duped into sending Captain America into a trap!

She rushes to the location, beating Cap there somehow, and falls victim of the Cyborg.  Cap arrives and immediately tackles the Cyborg.  They battle for six pages and Cap eventually comes out on top.  It’s at this moment that Nick Fury and S.H.I.E.L.D. arrive, telling Cap that MODOK has fled.

Cap gets angry, as he believes Fury and Sharon, herself, have lied about her being removed from field duty, not knowing that she had rushed to his side, not from duty but from love.  The comic ends on a bit of a soap opera note, with Sharon shedding tears and wondering how she can ever convince Cap that she didn’t lie.  And Cap slowing walking away, wondering if he can ever trust Sharon again.

A nice done in one story that brings out the pathos in super-hero stories, well written by Mr. Lee and very well drawn by misters Colan and Sinnott.  A worthy addition to anyone’s collection.

Please return next week for a new Fabulous Find and again in two weeks for another RETRO REVIEW.  Stay cool this summer, my friends.