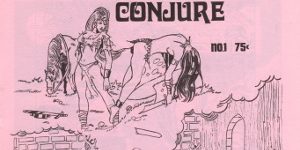 It’s Friday once again and time for a new Fabulous Find, and this week it is another fanzine I have recently added to my collection.  This one is Conjure # 1, dated 1974 from Thomas Sciacca and George Perez.  As Sciacca says in his editorial, Conjure is George and his attempt to “create a new form of comic-art, and pave the way for a fresh form of visual narrative”.  That’s a pretty nobel goal, but truthfully it still looks like an amateur comic book to this fan!

Here is the front cover, as drawn by George Perez: 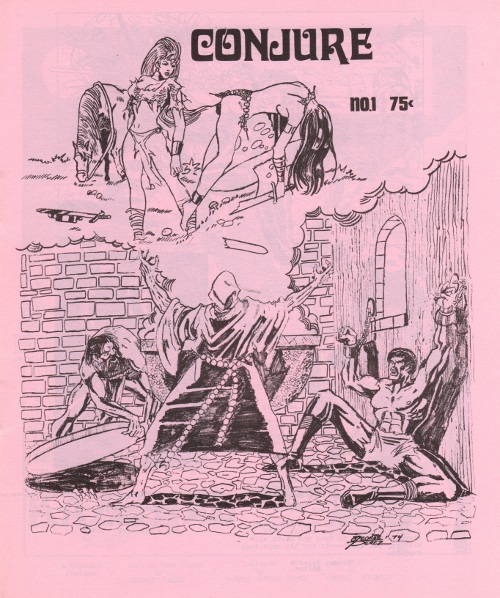 Obviously this is early work by George and no where near the art he would soon produce at Marvel and DC Comics, once he turned pro and mastered his craft.  But early Perez is still pretty neat!

The inside cover contains that editorial I quoted from above, as well as, a drawing or two by Sciacca and Perez.  The rest of the book is pretty much made up of four (4) stories: the first; “The Legend of Kazo-nal” which was written and drawn (both pencils and inks) by George Perez.  It’s a barbarian strip and it runs five (5) pages.  It is a continued story, and as I do not have the second issue of Conjure, if there ever was one, I do not know if the second part of the story ever saw print or not.

It does feature a pretty cool full page illustration on the fourth page of the story, take a look: 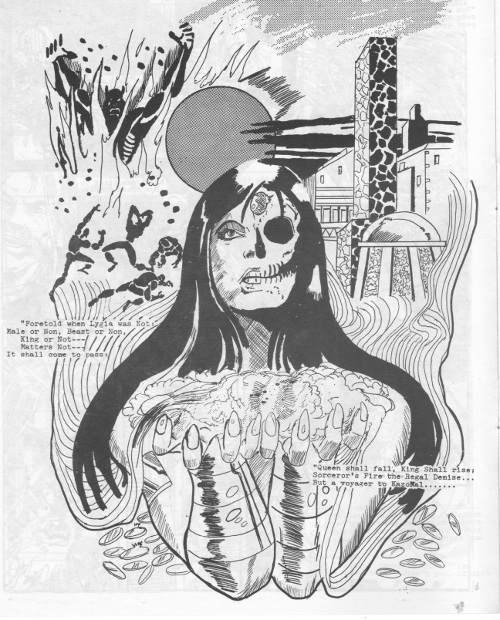 The second story is only two (2) pages and features a character named; Lewis Canis, which I believe is both written and drawn by Bill Maher.  At just two pages and continued, it’s hard to really get a handle on it.  Is it a vampire tale?  A hard-boiled detective strip?  Some sort of weird mystery story?  I really can’t say.

This is followed by a full page ad for another fanzine; She Devils, or possibly George Perez’s She Devils.  I think I actually own this one, but I can’t seem to lay my hands on it quickly to confirm.  The art in the ad is also done by Perez.

The third story is also another short two (2) pages.  It is not titled, but is is written by Ross Wood and Sciacca and pencilled and inked by Bill Adams.  Also a barbarian type strip and Adams art reminds me a little of pro, Joe Staton.

Which brings us to the fourth and final story, entitled; The Dark Tower”.  This strip is both written and pencilled by Thomas Sciacca.  The inks were provided by Jim Glenn, Perez and Sciacca.  Sciacca tries to channel Gil Kane, in my opinion in this barbarian strip.  It runs nine (9) pages and tells a complete story.

Wrapping things up are two more full page illustrations, the first from Jim Glenn, the second by Sciacca and Adams.  The back cover is also by George Perez, featuring a female warrior type about to battle a skull faced baddie!  Here it is for your viewing pleasure: 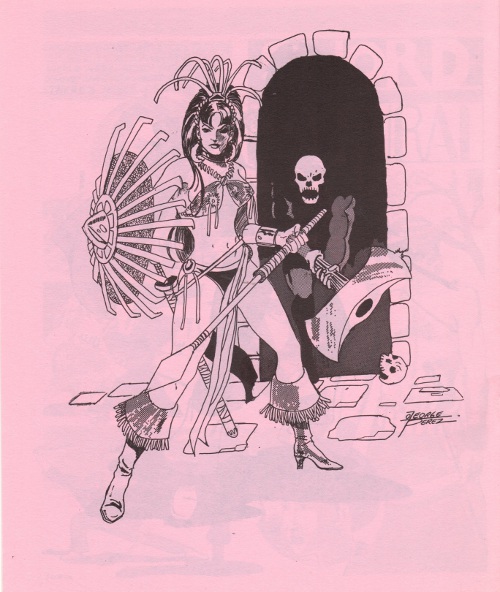 And that wraps things up for this Fabulous Find.  Please come back next Friday for a new RETRO REVIEW.  I hope everyone is having a wonderful summer and enjoy August!