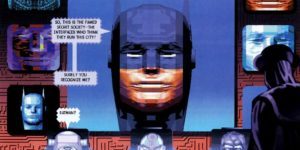 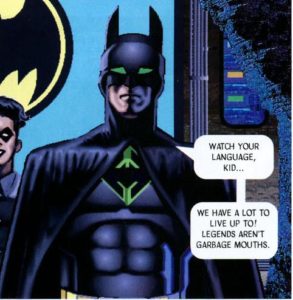 Welcome back to Strange Times & Places, where today we’re looking at a cyberpunk superhero tale created with the absolute best digital artwork 1990 had to offer: Batman: Digital Justice.

Being a tale set in a possible future, this would be classified as an Imaginary Story. Somewhat unusually for a Bat-Future, no descendants of the Wayne family are present. Instead, it is the grandson of Commissioner James Gordon who takes up the mantle, with Batman having apparently died childless. 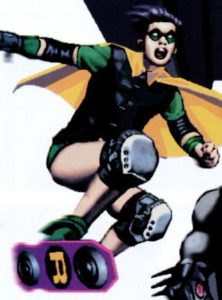 In the Gotham City of the 21st century, the police are aided by weaponized robots called Servo Drones. Sgt. Jim Gordon, grandson of Gotham’s legendary police commissioner, becomes suspicious that these drones may have been tampered with when they begin killing “perpetrators” based on flimsy invocations of self-defense programming with little to no evidence left of who those perps were. This will lead him to a conspiracy tied deeply into Gotham City’s government, one that will require justice from outside the law to take down – one that will require a new Batman! 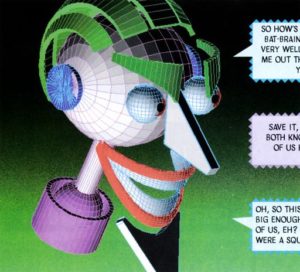 The Joker Virus, which I *think* Mister J programmed from a 90sscreen saver.

Come Back Next Week for a Brand New Installment of Scripting Errors!