It’s been a while since I reviewed a Charlton Comics Group comic book, so I’ve excavated my copy of Captain Atom, Volume 2, number 83, cover dated November 1966.  For a too short period during the sixties, Charlton Comics tried their hand at producing super-hero comic books, or in their vernacular, Action Heroes!  The hero that got them started was; Captain Atom! 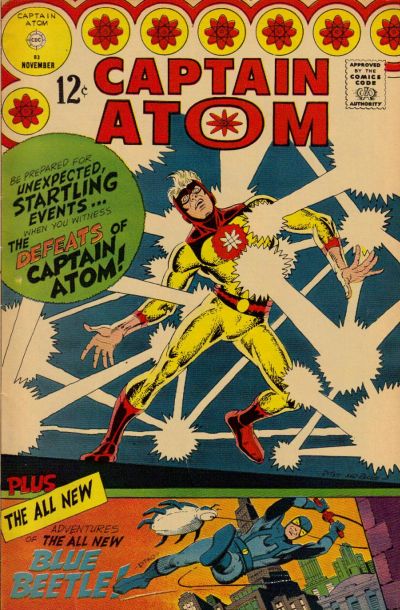 The first story featured Captain Atom and is entitled; “Finally Falls The Mighty!”  Ditko plotted the story but it was scripted by David Kaler.  Ditko provided the pencils and the story was inked by Rocke Mastroserio.  The story runs eighteen (18) pages and within Captain Atom faces off against a group of criminals completely covered in green costumes.  When they endanger innocent bystanders, Captain Atom is forced to let them escape so he can save the bystanders.

During the rescue, the Captain’s costume is damaged and his radioactivity becomes public.  His stock with the public then takes a sudden nosedive.  Shortly thereafter, Captain Atom is forced to save a military base thats nuclear reactor has overloaded due to sabotage.

The result is that Captain Atom loses his powers and it’s then that the costumed baddies strike again and the good Captain is forced to fight them with just his fists.  Needless to say, he is quickly overcome by the enemies’ greater numbers!

And that’s where the story ends in this issue.  Readers would have to pick up the next issue to find out the outcome.  And this would have been a hit or miss situation for a lot of readers, as Charlton did not get the best distribution deals that DC Comics and shortly Marvel Comics received.

There is a one (1) page letters page and there were letters from well known fans of the day, people like; Andy Yanchus, Mike Robertson and Guy Lilliam III.

Following the letters page we get the second story of the comic, a seven (7) page Blue Beetle story.  This is a brand new Blue Beetle, which was conceived by Steve Ditko.  Ditko provided the plot, as well as, the pencils and inks for the story.  But the story itself, was scripted by Gary Friedrich.

It introduces the new Blue Beetle, who it was later revealed to be a relative of the original Blue Beetle action-hero.  This introductory tale battling a gang of bank robbers.  Ditko reveals a little about the Beetle’s technology, including a his flying Beetle.  After an initial failure, the Beetle is able to corral the bank robbers and turn them into the police.

The new Blue Beetle held down the back up story in Captain Atom’s comic for a few issues and then graduated to his own solo comic.  In fact I reviewed that one a long time ago, if you care to search for it in the archives, you can check it out.

Thanks for stopping by and be sure to return again next week for a new Fabulous Find and again in two weeks for yet another RETRO REVIEW.  Til then …