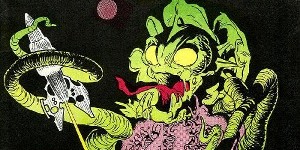 My friends, it’s time once again to bring forth a new, bright, and shiny Fabulous Find.  This week, I once again delve into the vault’s fanzine section and have pulled out my copy of Fantasy Illustrated # 1, cover dated Winter 1963 – 1964.  I really love these old fanzines.  This one is published by early comic book fan editor, Bill Spicer.  Though the title sounds more like a science fiction fanzine than a comic book fanzine, but we won’t hold it against Bill.  Take a look at the great cover provided by Landon Chesney. 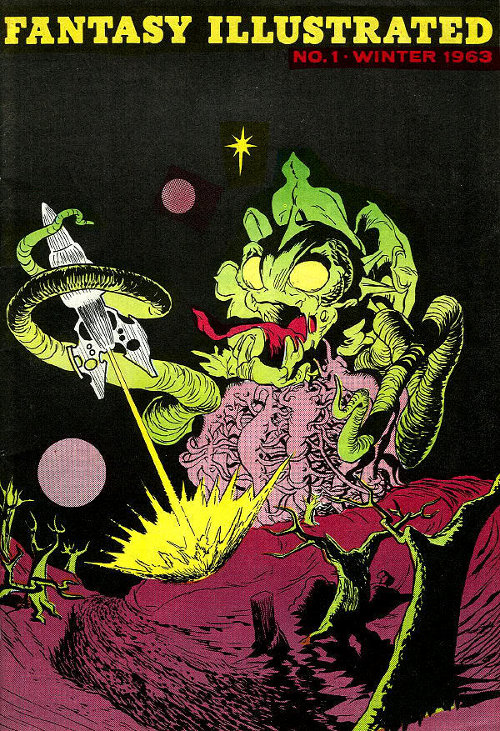 Hey, the cover could pass as a science fiction illustration, as well.  Maybe this is more science fiction than comic book related?  Actually it’s a little bit of both, with maybe a little horror and satire thrown in for good measure.

The fanzine contains a long editorial by Spicer.  Three full pages to be exact.  Bill had a lot to say about his new fanzine and he even finally got around to thanking the individuals who participated with the words and pictures.

The fanzine features four (4) stories.  Two I really liked and two were so okay in my book.  The lead story was “Jon Jarl of the Space Police in the “Ancient Secret”.  This story runs eight (8) pages and it is written by Eando Binder. Though it is adapted by Bill Spicer, with the art be provided by a young Alan Weiss.  The character, Jon Jarl, was conceived and written by Binder back in the 1940s in two (2) page text stories that appeared in Captain Marvel Comics.  These stories allowed the comics to be shipped through the mail at a cheaper shipping price, due to some Federal Postal regulations.

The story is pretty simple and the art lacks professional quality.  As far as I know, this was the first time Jon Jarl was rendered in comic form, so that’s a huge first for this new magazine.

Next up is the super-hero satire story; “Will the Real Lance Lightning Please Sit Down!”  It is written by James Toren and the artwork is done by fan favorite, Richard “Grass” Green.  Green went onto a long artistic career in the comic book fan arena, but was never able to make it big as a comic book professional.  Maybe his art, like another fan favorite, Ronn Foss, just didn’t live up to the work of other professionals.  Both had a rather loose and sketchy style that I guess fans liked but most people didn’t care for.

Here’s the splash page to that story: 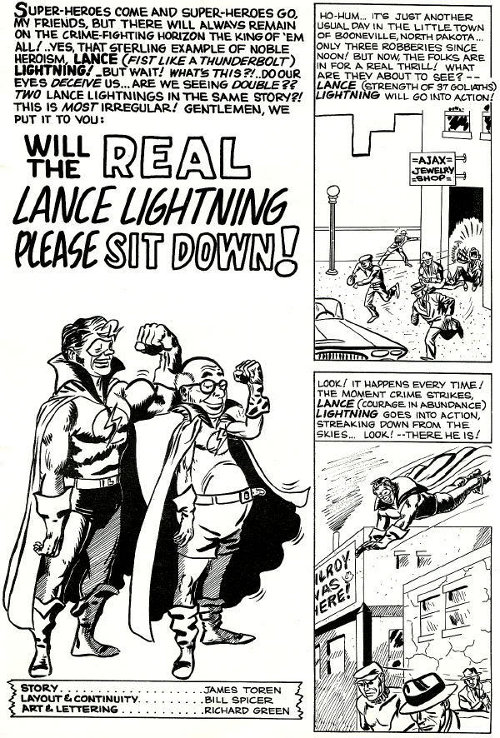 I think it’s a well done super hero parody strip told in eight (8) pages and a fun read.  It’s one of my two favorite stories in this issue.

Next up is “The Moon Ants” written and adapted by Bill Spicer, with artwork by Buddy Saunders.  This eight (8) page story is also of the science fiction, spiced with a little horror, type story.  It is not really to my liking in either story or the artwork.  Saunders was one of the famous Texas Trio that published a number of their own fanzines during the sixties.

The fourth story is “Adam Link’s Vengeance”.  It’s written by Eando Binder with the art provided by D. Bruce Berry. Again the story has been adapted by editor, Bill Spicer.  Like Jon Jarl from the first story this issue, Adam Link is a character that was created by Earl and Otto Binder, combined to make the name; Eando.  This character first appeared in a series of science fiction prose stories in Amazing Stories from 1939 to 1942 (10 all totalled). 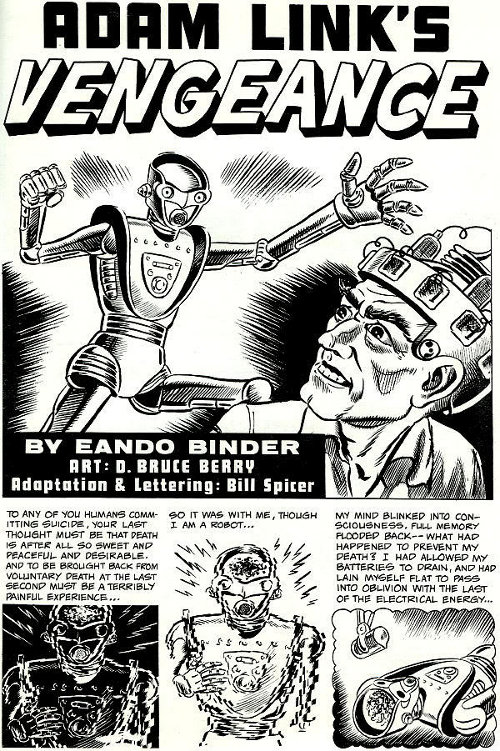 The series was adapted to comic book form a couple of times.  First by EC Comics in 1955, in issues # 27 through 29 of Weird Science Fiction. And then again by Warren Publishing in 1965 through 1967 , in various issues of Creepy Magazine (issues 2 – 15).  Interestingly the artist in both of those adaptations was Joe Orlando.

But this adaptation occurred between the EC and Warren adaptations and adapted a different story entirely. Actually this eleven (11) page story in this issue is only part one of the story.  It will be continued and completed in issue # 2 of Fantasy Illustrated.

The story involved a robot created in the form of man.  He tries to commit suicide based on loneliness, but is saved and is given a mission to create another companion robot.  Using the assistance of the scientist who prevented his suicide and the help of friends made in early Adam Link stories, Adam creates Eve, a female robot to keep him company.  Of course, the scientist who helped Adam, turns on him and using technology takes control of Adam Link and the new robot Eve.

And that’s where the story ends here in issue number one.  As I said above, the story’s conclusion takes place in the next issue.  One thing to note, is that this story won the Alley Award for best fan comic strip for that year.

One other thing you might be interested in is that the Adam Link stories were twice used on the television show, The Outer Limits.  Once in the original series in 1964 and the other in the revised series in 1995.  Both stories starred Leonard Nimoy and were based on different Adam Link stories.

Hope you enjoyed this look at Fantasy Illustrated # 1 from 1963.  And please return next week for a new RETRO REVIEW and of course, Fabulous Find will return in two weeks.  Be seeing you …