1 out of 4 – Would Recommend: Superman IV: The Quest for Peace

Welcome back to 1 out of 5 – Would Recommend, where we acknowledge that Batman V. Superman: Dawn of Justice has opened to awful reviews (which this reporter finds overstated). Well, no matter how you feel about the movie, it could always be worse – and 1987’s Superman IV: The Quest for Peace proves it!

Fun Fact: They made the actor wear this to the premier. Christopher Reeve was supposed to dress as Superman…and didn’t show up.

Superman decides to rid the world with nuclear weapons, gathering the world’s stockpiles and tossing them into the sun. Lex Luthor uses this opportunity to clone a stolen sample of Superman’s DNA, creating the powerfully evil Nuclear Man! Lex pits his creation against the Man of Steel, hoping to clear the way for his plans of world domination.

Menahem Golan and Yoram Globus, the Go Go Boys of Cannon Film Group! These men perfected the art of the low budget movie in the early 1980’s, giving the world Chuck Norris as a leading man, the Death Wish sequels, Texas Chainsaw Massacre II (along with several other Tobe Hooper flicks), and they released forty-three movies at their height (about two years before their big fall). Superman IV, along with Masters of the Universe and the Sly Stallone arm wrestling movie Over The Top, were intended to catapult Cannon into the big time as a film studio…and all three were big box office disappointments.  That, combined with purchases of distributors and theaters, led to an end of the Golan-Globus team.

There’s a fantastic documentary about the heyday of Cannon, Electric Boogaloo, on DVD and on Netflix right now. It is highly recommended.

This movie is really, really, incredibly dumb. However, it has a certain low budget goofiness that the other “bad” Superman movies (Superman III and Superman Returns being the least controversial claimants to the title) lack, and that makes it a much more enjoyable watch. 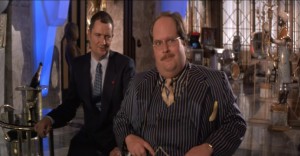 Jek Porkins has been in some classic sci-fi franchises, man.

NEXT WEEK: We continue examining Golan & Globus’ work, going back to their early days of American success with 1981’s Enter the Ninja.