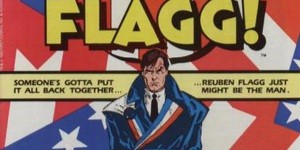 Welcome back for this week’s RETRO REVIEW.   This week I am featuring American Flagg! # 1.  This comic was published by First Comics, with a cover date of October 1983.  The cover is penciled and inked by Howard Chaykin.  Here is that cover: 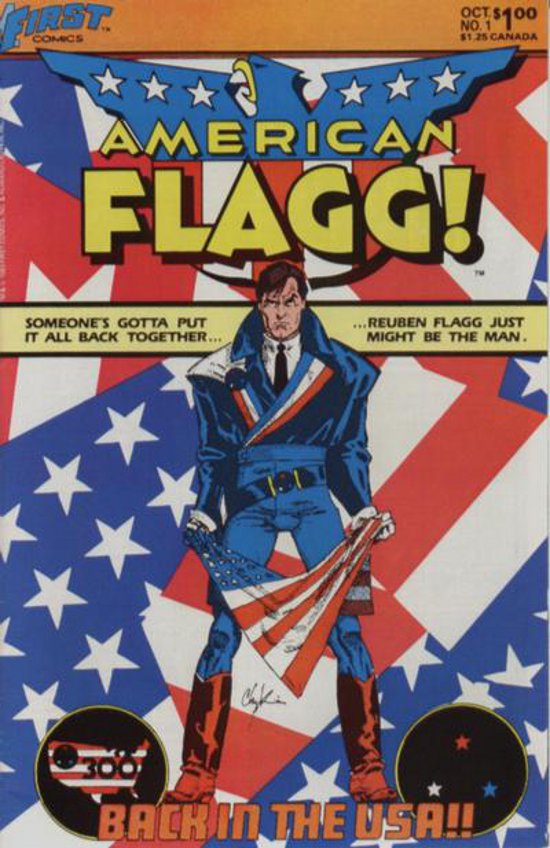 Chaykin had been absent from comics for a little while, before jumping back into the comic book business with the publication of this new comic.  At the time, First Comic’s President, Mike Gold, said that Howard Chaykin is one of the most patriotic persons he knows.  “Not the usual Love it or Leave it nonsense that serves to divide instead of unite, and is therefore not patriotic. Howard’s patriotism comes from pride – and from great hopes for America.  So amid all the violence and women, amidst all the style we have come to associate with Howard’s work, you’re going to find a great deal of patriotism in American Flagg.”  Not a bad little introduction to a new comic!

The story is entitled; “Hard Times” and takes place in a possible future America, one not that far from the year 1983 when this comic premiered.  The setting is “The Plex”, formerly Chicago, Illinois and the date is Saturday, October 4, 2031.  It appears that The Plex is run by violence, sex and money.  Anything and everything is for sale, at the right price!  And it is available to the viewing public, as well.

Howard Chaykin does it all, he writes, pencils and inks this comic book.  Only the colors are provided by someone else.  Chaykin introduces us to the characters in his comic; Chief Ranger Hilton Krieger, his daughter, Mandy, also Gretchen Holstrum,  a hostess (i.e. madam) at the local Love Canal franchise.  As well as, the hero of the comic, Ruben Flagg, formerly an actor, who was starring in the television show, Mark Thrust, Sexus Ranger.  “The provocative adventures of a fearless vice cop walking the mean streets of an unnamed, untamed and sexually disease riddled sector of a great urban metroplex.”

Before the comic reaches double digits in pages, Flagg is thrown into battle with a local Go gang, an anarchist terrorist motorcycle club, and quickly has a sexual tryst with Ms. Holstrum.  So we know right away, this is not our father’s comic book!  Flagg meets the mayor of The Plex and settles into his first week on the job.  We also learn that his tour of duty is to be five years!

Flagg meets Raul, a talking cat, and discovers that the favorite local show is Bob Violence. He soon discovers that only he and the cat, Raul, can see that the show is riddled with hypnotic subliminal commands to kill, mutilate and rape etc.  Before the first issue comes to a close, Flagg makes a deal with the leader of one of the Go gangs, breaks the deal and imprisons the Go gang leader and puts a stop to the Bob Violence show, with the help of Mandy!

Not a bad beginning to a new series!  I know it made me want to pick up the next issue, as it leads off with a bang and left me wanting more.  What more could you want for a new comic book series?  Here’s the covers to the second and third issues for you, as well.  Enjoy! 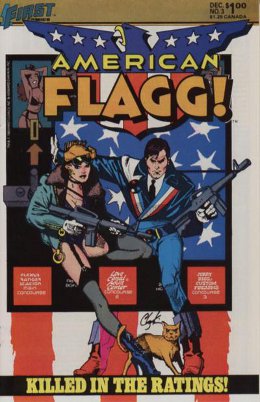 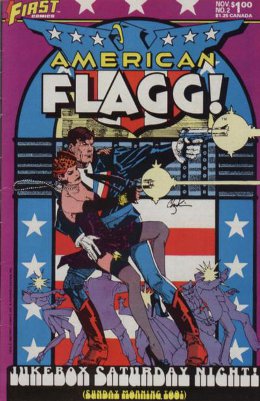 That’s it for this week.  If this week’s column seemed slightly familiar, that was because it was a reworked column that first ran in July 2010.  But as that was almost six years ago, most of my readers never saw it, unless you’ve taken the time and effort to go through an read my entire archive of columns.

Please return for a new Fabulous Find next week and I’ll also be back in two weeks with a new RETRO REVIEW. Til then enjoy the changing weather and summer will be here soon!  Be seeing you …