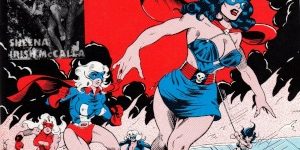 Hi good folks. I hope everyone is doing well here in December! I’m back this week with another Fabulous Find. It’s another fanzine, as a matter of fact. From Paragon Publications comes Femzine # 1, dated 1981. Paragon Publications is a company owned by writer/artist Bill Black.

Here’s the front cover by Willie Blyberg and Bill Black:

The fanzine is forty (40) pages, including the color covers, both front and back. The fanzine cost $3.00 new in 1981. The insides of the covers are black and white. On the inside front cover is a black and white picture of Irish McCalla as Sheena of the Jungle from the television program of the same name.

Next up is the editorial page, with said editorial by Black. Following this is the first of three comic strips. This first one brings back the golden age heroine, Ms. Victory, in a new adventure, where she joins up with Black’s other new and revived female characters, Synn, the Girl from L.S.D., Tara, a modern day jungle girl, Phantom Lady, another golden age revival and the Blonde Bomber. Together they would become the All Girl Squad.

Interestingly, Black and first proposed the idea of the All Girl Squad to D.C. Comics, using their characters, but when the idea didn’t catch on, he decided to do it himself.

This first strip runs seven (7) pages. Here is the first page from the strip, which is written by Black, pencilled by Blyberg and inked by Black and even lettered by Blyberg, as well.

Following this strip is a short article on Sheena, Queen of the Jungle written by Bill Black, which includes a number of great pictures. Next is an article focusing on the actress, Irish McCalla, who portrayed Sheena. Again this article is accompanied by quite a few very nice photos.

One thing I did learn was the actress Anita Ekberg, had originally been selected as Sheena, fresh from winning the Miss Sweden title, but when Eckberg failed to show for work, McCalla was called in and given her first acting assignment in Hollywood.

Which brings us to the middle of this fanzine and there we are treated with a lovely Bob McLeod center-spread of Sheena, Queen of the Jungle, I guess that’s not a big surprise, considering the previous two (2) articles. Take a look:

Next is a short three (3) page Spygirl comic strip. It is labelled as part five and is continued, but I’m not sure where. Also no credits are listed on this strip. I’m guessing it’s all done by Bill Black, but I can’t be sure.

Following this comic strip is a two (2) page article on television’s “jiggly shows”, such as Charlie’s Angels. It is written by Bob Greene and has a nice illustration by Harvey.

And then we get another comic strip, this one is the longest, as it runs eight (8) pages and features an adventure of the Phantom Lady. It is written by T. Casey Brennan and Black and drawn by John Beatty and Willie Blyberg.

The fanzine wraps things up with a great Jeff Jones full page black and white drawing on the inside back cover. And for your viewing pleasure, here it is:

And finally the back cover, featuring DC Comics heroines; Wonder Woman, Supergirl and the Black Canary as drawn by Terry Austin.

And that’s all there was/is. Thanks for stopping by and I hope to see you again soon for another Fabulous Find or even a new RETRO REVIEW!