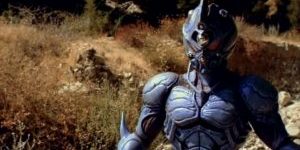 Inspired by some collectibles based on the Guyver movies popping up at auction recently, Tokusatsu Gesundheit ends the year examining the ONLY American Guyver flick you can currently stream: 1994’s The Guyver 2: Dark Hero.

One year after gaining his alien super suit in defeating the Zoanoids of the Kronos corporation’s Los Anglees branch, The Guyver discovers an archaeological dig that might shed some light on the origins of his abilities. Unfortunately, the crows corporation is much larger then the division he destroyed and those weren’t the only Zoanoids in their employ…

Directed/produced by Steve Wang, who did the same for the first Guyver flick (which is nowhere to be found, at least not readily). He would go on to direct some of Power Rangers Lost Galaxy before creating the mid-00s attempt at bringing Kamen Rider to American shores, Kamen Rider Dragon Knight. The man’s American tokusatsu bona fides are undeniable.

The creature and make-up effects are shockingly good for an American Direct-To-Video movie, better than some equivalent Tokusatsu of the era. Unfortunately, the quality of the writing and directing is only just so-so. Worth watching, but not something you need to rush over to Amazon and rent right this minute either.