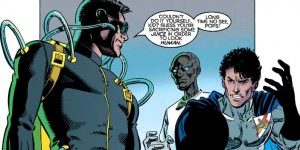 The world of Tangent Comics is a Royale With Cheese wherein Dan Jurgens, the architect of the whole concept, started from the character’s name and reinvented them entirely. It also took considerable liberties with real world history, most notably having the Cuban Missile Crisis end in the destruction of much of the Southeast United States (to the point that New Atlantis, one of the major settings of this universe, is the rebuilt ocean-fronted version of landlocked Atlanta, GA).

Three years after the murder of the second Atom at the hands of the Fatal Five, his son has taken up the family mantle to bring them to justice! His battle with his father’s killers will lead him to the dark secrets that his family’s fame and fortune are based on, secrets that would potentially destroy the public’s faith in superheroes!