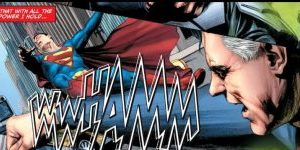 Welcome back to Strange Times & Places! The Crisis on Infinite Earths gets underway this weekend on The CW, pretty immediately introducing the Kingdom Come Superman into live action. In honor of that, we’re looking at KC Superman’s time in the mainstream DCU with Justice Society of America Kingdom Come Special: Superman #1!

It’s a Royale With Cheese wherein Superman went into exile shortly after a 90s style wave of lethal superbeings started their rise. He came out of seclusion and tried to set things right, but a riot at his totally unsanctioned prison for metahumans who didn’t toe his line lead to an international government response that wiped out all sides of the conflict…and sent Superman to New Earth.

So far as Superman knows, his world is as good as dead – the U.N. bombed the largest superhuman battle the world had ever seen so hard it knocked him into another universe. Working with the Justice Society of America, Kal-El is working to prevent his future from coming to pass…even as the generation of heroes that ultimately destroyed his seems to be rising. And now, the worst day of his life looks to be playing out in this new universe…looking to sell action figures online?