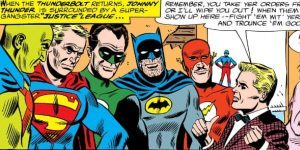 Welcome back to Strange Times & Places, where we’re gearing up for the Crisis on Infinite Earths by looking back on an early Crisis on Multiple Earths tale – Justice League of America #37-38!

This would be a For Want of Nail tale, like most altered present tales. Most of the story takes place on Earth A, which is just Earth 1 altered to remove the Justice League of America (or at least the active members as of #37) and replace them with a group of super-powered thugs known as the Lawless League.

Johnny Thunder, the youngest and most impulsive member of the Justice Society of America of Earth 2, uses his magical Thunderbolt to travel to Earth 1. It seems he’s jealous that most of his JSA compatriots have counterparts on that Earth, so he wants to find his. Turns out he does, but he’s a small-time crook and able to quickly wrest control of the Thunderbolt away from his more naïve counterpart. He orders the nigh-omnipotent genie to remove the Justice League of America from the timeline and, when the JSA follows their Johnny, to replace the JLA with members of his gang to battle them.