Fabulous Find: What a Way to Die 45 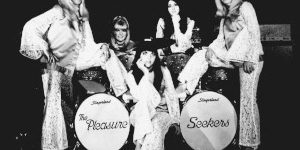 Hey there fans. I’m back this week with a new Fabulous Find. It’s another musical find and this week I’ve pulled out a 45 rpm record by Detroit’s own The Pleasure Seekers! This was an all-female band featuring the Quatro sisters and a couple of their friends. And yes, this song features a young Suzi Quatro!

The song itself is a great proto-punk garage classic entitled; What a Way to Die. It came out in 1965 on Hideout Records.

During May 1964, the Pleasure Seekers were formed by Patti Quatro. The original lineup included lead singers Suzi Quatro and Patti Quatro with Nancy Ball on drums, guitarist Mary Lou Ball and Diane Baker on piano. Leo Fenn, the husband of Arlene Quatro, was the band’s manager. Patti eventually asked Dave Leone to give them a spot at his popular teen night club, The Hideout. He put them on stage two weeks later, and they soon became well known at the venue.

The band put their first record out in 1965, when Suzi Quatro and her sister Patti Quatro were 15 and 17 years old, respectively, on the Hideout label. Both sides of their first single – “Never Thought You’d Leave Me” b/w “What a Way to Die” – were popular at the time. The b-side, which I am featuring today was featured in the 1988 cult film; Blood Orgy of the Leather Girls. Both songs, with lyrics by Dave Leone, are included on the compilation album; Friday at the Hideout, which offers a retrospective of Hideout Records, and a very hard to find album that I highly recommend if you can find one!

During early 1966 Sheryl ‘Sherry’ Hammerlee joined the band on rhythm guitar and Arlene Quatro replaced Diane Baker on the piano. Within October of that year Darline Arnone joined the band. Pami Bedford also became a member of The Pleasure Seekers in August 1967 in replacement of Hammerlee.

In 1968, they became one of the earliest all-female rock bands to sign with a major label, Mercury Records. They released a second single, “Light of Love” b/w “Good Kind of Hurt”, with both songs charting. The group matured into a dynamic show band and, using Detroit as home base, toured the U.S. Their show featured an entire Sgt. Pepper/Magical Mystery Tour revue, as well as a Motown sound revue, and everything in between, as well as featuring one of the earliest known light shows for their act.

In 1969, The Pleasure Seekers morphed into the band; Cradle, changing direction musically and writing heavier original material and touring throughout the U.S. Arlene was now manager and sister Nancy Quatro had joined as vocalist and percussionist. The group toured vigorously, playing concerts and pop festivals throughout the U.S. with popular bands of the day, ending with a tour of Vietnam. In 1971. Suzi Quatro was signed by producer, Mickie Most to his RAK Records label, leaving for the UK and solo fame.

Thanks for stopping by. be seeing you …