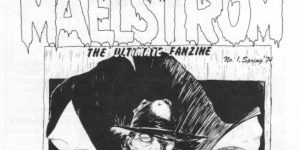 Hey, I decided to come back from vacation after all. I definitely enjoyed my time away and almost decided to retire my columns, but here I am, at least through the end of the year. At the end of the this year, I’ll have been doing these columns for ten (10) years. Can you believe that? I guess time really does fly by when you’re having fun!

But back on track, with this week’s Fabulous Find, I bring to you Maelstrom # 1. This fanzine was published in the Spring of 1974. It is/was the brainchild of Russ Maheras, a fan hailing from Chicago, Il, or at least it’s environs.

This great little (well not really) fanzine weighs is at sixty (60) pages including the covers. And the first thing you’ll notice is the really nice pulp noir cover drawn by professional artist, Michael Kaluta, featuring the three big names for Street & Smith Publications; the Shadow, Doc Savage and the Avenger.

And here is that very cover for your eyeballs to drool over (Can eyeballs drool?):

The fanzine is almost a one man production, as Russ Maheras serves as editor, publisher, writer and artist for this fanzine. He is joined by Roy Kinnard, who also writes and provides some art, along with E. Brian Murray who also wrote for this issue.

Right off the bat, Russ provides a nice touch, by dedicating the issue to fellow Chicagoan fan writer/artist, Alan James Hanley on the inside front cover.

This is followed by a Table of Contents and then an editorial. Where within, Russ admits to being only nineteen (19) at the time of publication. His two fellow contributors are twenty-two (22, Roy) and twenty-five (25, E. Brian).

Kicking off the meat of the fanzine is a very nice six (6) page entitled; “Brennan Mob” with the plot and characters provided by Kinnard and the script and art by Maheras. The story is about a murderous gang from the 30’s that return to seek revenge.

Next up we get a couple of pages of what I would guess are Marvel Comics’ inspired giant monsters! by Kinnard and Maheras. Following this is a short two (2) page strip entitled; “Space-Doll” by Kinnard.

Then comes a very nice nine (9) page article entitled; “A Houseful of Death!”, written by E. Brian Murphy. It is illustrated by Maheras. The gist of the article provides a history of the three Street & Smith pulp heroes from the cover.

Here is the title illustration:

Another strip follows; “Death Motion”. It is scripted by Kinnard and Maheras with art by Maheras and runs six (6) pages.

Next up is a one (1) page article entitled; “Superheroes In The Cinema” and Kinnard looks at the 1936 Flash Gordon serials. Following that column is another strip; “The Beast Of Berlin” by Kinnard, I believe and it runs nine (9) pages.

Then we get a nice Sgt. Fury pin-up drawn by Maheras. In fact, here it is:

Things start to wind down with a strip introducing Anthony Wade, written by Kinnard and drawn by Maheras. This runs nine (9) pages. Another one (1) page Maheras drawn giant monster follows, then another four (4) page strip drawn by Kinnard entitled; “The Blood-Suckers”.

Things finally wrap up with a couple of one (1) page pin-ups drawn by Maheras and an ad for Alan Hanley’s fanzine Comic Book # 6. All in all, an excellent first fanzine foray by the young Russ Maheras.