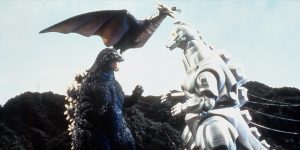 Welcome to Tokusatsu Gesundheit, where we’re continuing our extended look at the Heisei-era Godzilla series with Godzilla Vs. Mechagodzilla II.

G-Force, the U.N.’s military answer to the ongoing Godzilla problem, has two super-weapon projects in final stages: Garuda, a high-tech fighter/bomber meant for fighting kaiju, and Mechagodzilla, a 100% robotic Godzilla based on Mecha-King Ghiddorah. Both of these vehicles will prove necessary when the chance discovery of irradiated Pteranodon eggs on an otherwise uninhabited island lures both Godzilla and Radon to Japan!

This flick was originally intended to be the last in the series, making way for the then-upcoming TriStar feature. Toho would learn about the ponderous pace of the American studio when they made THREE Godzilla movies in the time it took to get that one off the ground, but this epic monster mash featuring the return of Rodan, Mechagodzilla, and Baby Godzilla definitely has a bit of a finale feel to it.

I am a big fan of the giant robots being human inventions in Toho’s Kaiju Universe, which was introduced in this flick (since Mecha-King Ghiddorah is from the far future, I’m not counting). Rodan’s role in the plot feels a touch unnecessary, but overall this movie’s a worthy addition to the canon.

Come Back Next Week for 1 Out of 5 – Would Recommend! Assuming, of course, I get through the animated Titanic movie with my sanity intact.