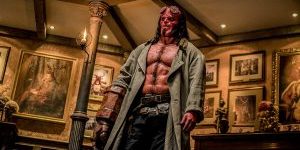 Welcome back folks! We’re taking yet another detour from the schedule, in part because I didn’t get around to Titanic: The Animated Movie and partly because the new Hellboy flick in theaters really isn’t 1 out of 5 fodder – despite what the reviews say. Minor spoilers abound

This movie isn’t that great. It certainly is fated to lack the cult classic staying power of the Guillermo del Toro -helmed flicks and was never going to do well enough to get a sequel – the pacing is weird for a movie, it doesn’t know exactly what kind of movie it wants to be (gritty, violent fantasy story or Deadpoolesque comedy), and while all the performances are well done, there’s nothing particularly stand out.

But it’s not 15% positive bad, so your friendly neighborhood comic shop counter guy suggest you stream it or catch a matinee if you dig on the Mignolaverse. This will likely go down in history as the Amazing Spider-Man of Hellboy movies – good, not great, with potential that it will never be explored.