Fabulous Find: The Mighty Groundhogs – Who Will Save the World lp 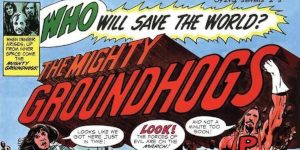 Howdy, to all of you that have made it back to my weekly column. This week, again I am featuring a Fabulous Find. And that find is an album, an lp, a long player, if you may. It’s by an obscure British band named; The Mighty Groundhogs and the album is; Who Will Save the World.

Take a gander at the cover. Recognize the artist? Yep, that’s Neal Adams art on the record cover.

The Groundhogs are a British rock band which was founded in late 1963. They made a living during the 60’s touring extensively. Tony McPhee, the guitarist and vocalist is the sole constant member of the group throughout the years, as the band has gone through many personnel changes over the years.

The band was originally formed as The Dollar Bills in London by brothers Pete & John Cruickshank. Tony Mcphee , the lead guitarist in an separate instrumental groups, joined the group later that same year. McPhee steered them towards the blues and renamed them after a John Lee Hooker song, “Groundhog’s Blues”.

For the Who Will Save the World lp, recorded in 1972, there were only three members, Tony McPhee (guitars & vocals), Peter Cruickshank (on bass) and Ken Pustelnik (on drums). This was the only lp that charted in the United States, and only at number 202. Though the group did significantly better in the British charts, with three of their albums charting in the top ten, including Who Will Save the World at number 8.

Needless to say, I bought the album, unheard, just because of the Neal Adams cover. And it was a thrill to open it up and discover additional Adams artwork within, as well. I can’t say I really fell in love with the music, but I did appreciate the artwork, and still do today, almost fifty years later.

So here is the additional Neal Adams artwork for you to enjoy. Oh yeah, there was a fold down/out portion of the gate fold sleeve too:

And you might notice there was even some comic book type ads at the bottom of page two, making it truly a comic book experience!

Before I let you go, here is a track from off the album, via YouTube:

Though the music hasn’t stuck with me, the packaging sure has. Hope you’ve enjoyed this Fabulous Find and return again next week for some more blog goodness, whether it’s new RETRO REVIEW or another Fabulous Find.