1 out of 5 – Would Recommend: Mortal Kombat Annihilation 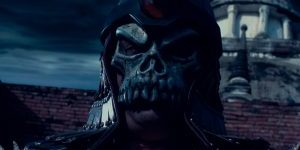 Welcome back to 1 out of 5 – Would Recommend, where…I still haven’t watched animated Titanic yet. I am, however, jazzed for the release of Mortal Kombat 11, so I broke out my old VHS copy of Mortal Kombat Annihilation to talk about.

In the immediate aftermath of Liu Kang’s tournament victory in the first movie, Outworld Emperor Shao Khan leads his armies to Earth and promptly murders one of its protectors. The survivors – Liu Kang, Sonya Blade, and Kitana – will have to recruit new warriors (Jax…. just Jax, really) to repel this invasion and prevent the merger of the realms!

Studio marketing execs, as far as can be determined. That’s a bit exaggerated, but not a whole lot of care went into crafting this flick. It is mostly just one fight scene after the next (not necessarily bad, natch) and managed to cram all but eight of the thirty-one distinct characters that appeared in Mortal Kombat Trilogy into the movie – and of that eight, two died in the first movie and two more are mentioned. Many of the fighters who show up do so as little more than cameos and most of them go unnamed.

This movie feels, despite having been a major release by a division of Warner Bros., inescapably like it was meant to be direct to video. The cast, the plot (or lack thereof), the special effects, and the production value all feel like something that was never meant to be seen on the silver screen. That said, it is an enjoyable ride, particularly for fans of the franchise who won’t be confused by the unnamed fighters popping up every five minutes.