1 out of 5 – Would Recommend: Nick Fury: Agent of SHIELD 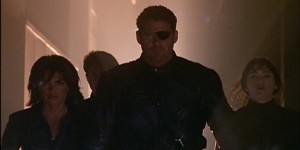 Welcome back to 1 out of 5 – Would Recommend! In honor of the impending release of Marvel’s Ant-Man, today we flash back to a time the only available Marvel movie starred the guy from Baywatch as Nick Fury and we liked it – 1998’s Nick Fury: Agent of SHIELD TV Movie! 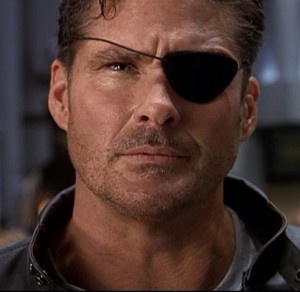 The best Nick Fury their budget could afford.

The villainous Viper (Sandra Hess) steals the cryogenically preserved body of her father, Baron Von Strucker, from SHIELD in order to re-engineer the Death’s Head Virus he carries in his veins. SHIELD has no choice but to reactivate retired agent Nick Fury (David Hasselhoff), the man who put Von Strucker on ice, to put a stop her nefarious plot. Nick and his team of elite agents must ferret out HYDRA’s base of operations and intercept the virus before it can be unleashed on New York City! Will they succeed? If you’ve seen literally any action movie before, you can guess the answer!

This movie is one of a trio of bizarre TV movies that aired on the Fox network in the mid-90s, along with an American continuation of Doctor Who and a movie based on Marvel’s Generation X (both in 1996). All three were, while ostensibly standalone features, intended to jump start TV shows. You will notice that none of them did, which should give you an idea of how well any of them were pulled off.

Worth noting that it was written by David S. Goyer, best known nowadays for his work on DC Comics’ movies, particularly the Dark Knight Trilogy. Nick Fury: Agent of SHIELD came out the same year as the Goyer penned Blade and Dark City and, as Meat Loaf said, two outta three ain’t bad.

Nick Fury: Agent of SHIELD is pure TV movie cheese from start to finish and is a blast to watch. It, like Vampirella, is a true stand out gem from the 90’s Dark Age of comic book movies…though not for reasons of being high quality. If nothing else, it will make you appreciate the Agents of SHIELD TV show more. 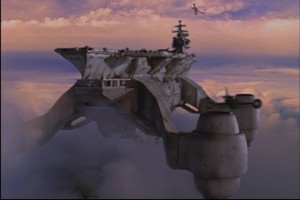 Like, seriously, this would still pass muster today, right? On TV?

NEXT WEEK: We’re gonna try to make ours Marvel from now until the release of Fantastic Four, so let’s watch the aforementioned Generation X!