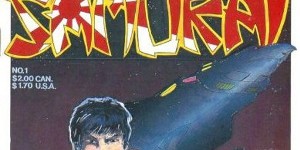 Time to do that thing that I do, and that’s publish a new RETRO REVIEW for your reading pleasure.  This week I’ve pulled out a comic from a long lost Canadian comic book company; Aircel Comics.  Anyone remember them?  They published comics beginning in 1985 and lasted until 1994.  Eventually they were absorbed by Malibu Comics and finally put to rest, when Marvel Comics bought Malibu in 1994.  This week I’ve unearthed one of their first publications; Samurai # 1, cover dated September 1985.

But first a little bit about Aircel themselves.  They were an insulation company in Canada going under the name Aircel Insulation.  When the Canadian government pulled their contract from Aircel, one of their employees convinced the owner to shift the company’s focus from insulation to comic book publishing!  That employee was Barry Blair, the creator of this comic book character, Samurai.

By the summer of 1985, Samurai # 1 hit the stands, selling for $2.00 in Canada and for $1.70 in the United States.  The art style of their first books were all based on Japan manga. Besides Samurai, they also released Dragonring and Elflord.  Let me know if you’d like a future RETRO REVIEW looking at these comics, as I own them, as well.  So let us take a look at the cover to that first issue of Samurai: 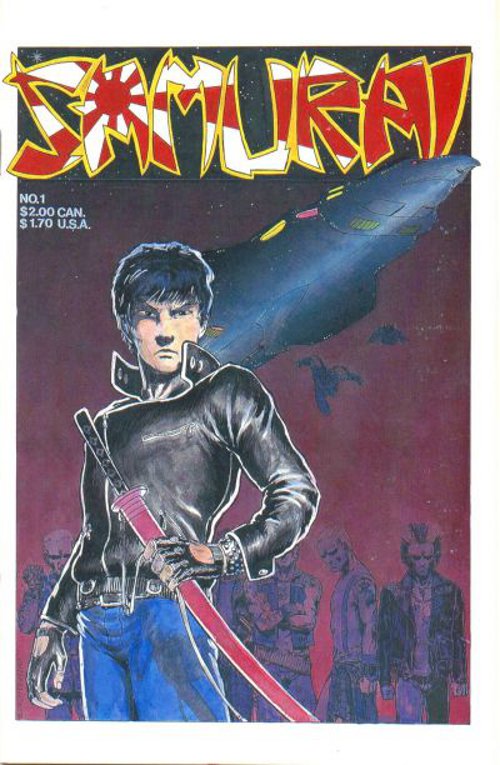 As I stated above, former Aircel Insulation employee Barry Blair convinced his employer to shift to comic books and was the creator of the first comics published by the new company.  The first issues cover was pencilled by Patrick McEown and inked by Barry Blair.  The story in the first issue is twenty-nine (29) pages in length and is untitled.  But it was written by Barry Blair and his brother, Bruce Blair.  The interior pencils were also done by Patrick McEown and Guang Yap.  The inks were provided by Barry Blair and Guang Yap.

The story centers on the United Nations Space Battleship Naganata, which is under the command of Velvet Black.  The book starts with a three (3) page prologue, featuring a clone of Toshira Kimura, that goes by the name Hotachi Kimura.  Interestly, the clone has been grown at a smaller size the Toshira, so that he can pilot a manga-like battle suit/vehicle.  He is on a secret mission to locate a missing scientist, Professor Stringfellow.  He discovers something on an island, but it is not reveals exactly what.

After the prologue, the reader is shown Commander Black, aboard the Naganata, who through flashback, reveals her ties to Toshira Kimura.  She sends out orders to have Kimura located and brought before her.  It is also revealed that someone on her staff is feeding information about Black’s actions/commands to an unknown source!

The scene shifts again to a bar where we find Kimura and his friend, Homer.  Homer seems to be there to provide comic relief to a certain extent.  Anyway, Homer is set upon by three men in suits in the bar’s bathroom, but manages to warn Kimura and together they defeat the men.  We also briefly meet Toshira’s sister, Gennin, in a two panel cameo.

Kimura is visit ad home that evening by a ninja clad Hotachi, who delivers Commander Black’s summons.  Toshira meets with Black the next morning aboard the Naganata.  She explains about the Professor’s disappearance and Kimura agrees to find the missing Professor.

Again the scene shifts, to the island where the Professor is being held captive, and again to the Professor’s young son, Simon, who is being tricked by the New Christian Society into joining their ranks.  Meanwhile Kimura is again attacked, this time in his home, but using a samurai sword and ninja throwing stars he again comes out on top.

Then there is one last scene shift, to Jamaica, where we find Homer in charge of a boat rented by Kimura.  A native Jamaican, King John, is added to the crew of Homer and Toshira, as they are forced to flee a set-up on Jamaica.  The first issue ends with Toshira, Homer and King John escaping in the boat on the way to the island where Professor Stringfellow is being held.

I should mention that the covers are in color, but the interior art is presented in black and white.  Not a bad first issue all in all.  The story is interesting and the art is presentable, at least in my opinion.  Again it is manga influenced, so some of you may not care for it, but others may find it terrific.  That’s one of the joys of comics, the different art styles available.

Anyway, Aircel published a lot of comics before they called it a day, and depending on your point of view, a lot of them are worthwhile.  But you’ll have to give it a try for yourselves.  And if you do, or did, back in the day, let me know your opinion on the books.

Thanks for stopping bye and please return next week for a new Fabulous Find.  Be seeing you …