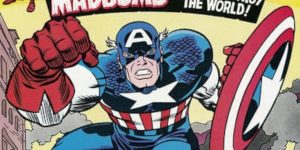 Greetings and salutations! I’m glad you found your way back for a brand spanking new RETRO REVIEW. This week I’ve pulled out a classic, cover dated January, 1976; Captain America # 193. This comic was published by Marvel Comics, as if you didn’t already know.

This issue features the return of Jack Kirby to Marvel Comics after a five (5) year hiatus, while he was working for Marvel’s competitor, DC Comics. The cover is drawn by Jack and it was inked by John Romita Sr. and features a now classic image of Captain America charging right at the reader, about to leap right off the cover and into their lap!

The story within is entitled; “The Madbomb, Screamer in the Brain”. It is both written and pencilled by Kirby and the inks were supplied by Frank Giacoia, with assistance from Mike Esposito. Here is the cover:

Jack kicks things off with Cap and his pal, Sam Wilson, the Falcon, having a quiet moment in Sam’s apartment. They are actually arm wrestling, believe it or not. Sam’s girlfriend, Leila Taylor, is preparing some food for them all when suddenly they all go crazy. Cap and the Falcon start battling each other for real and then Leila grabs a kitchen knife and tries to kill them both!

The craziness passes, when a brick is thrown through Sam’s window and the heroes discover that the people on the streets below, have all gone crazy and are trying to kill each other and cause damage to anything they can get their hands upon. Cap leaps into the fray and locates some sort of devise, which again affects him for the worse, but he is able to destroy it using his shield.

Shortly thereafter, a “government agent” (you can tell because he’s wearing a trench-coat and sunglasses) ((though it is shortly revealed that he is a S.H.I.E.L.D. agent)) arrives and tells Cap and Sam about the “madbombs”, a weapon that induces mass chaos.

They all fly to a secret destination and the two V.I.P’s are brought into a dimly lit corridor, where they are subjected to a gas attack, then flying “rammers” and finally walls that close in on them! They make it through the gauntlet, only to come face to face with Henry Kissinger!

But the gauntlet isn’t over yet, Cap and the Falcon are set upon by a dozen or so men. Cap easily defeats them all by himself and finally Kissinger calls a halt to the test, saying that there is no doubt that this is Captain America!

The issue wraps up with Kissinger briefing Cap and Sam and sending them on a mission to find and destroy the men behind the “madbombs” and one that is being called “Big Daddy”.

But that will have to wait until next issue. For a new jumping off point, by the returning Kirby, the issue is pretty good. The art is great, the storytelling is well plotted and only has a few weak points. I understand the naming of the “madbombs”, that makes prefect sense, but I don’t much care for the “Big Daddy” bomb name at the send.

Kirby wouldn’t be at Marvel but a short time, but it sure was great to see him on Captain America, though he chose not to return to do the Fantastic Four or Thor. I would have loved to see him do the art on those books upon his return. Instead, he did the Black Panther and the Eternals, which I understand that Marvel Studios/Disney are planning to base a future movie on. Can’t wait for that one!

Thanks for stopping by for this RETRO REVIEW and come back next week for another Fabulous Find. be seeing you …