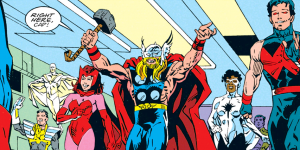 Welcome back to Strange Times & Places, where today, in honor of Avengers: Endgame, we are talking about What If? #55-56: “What If the Avengers lost Operation: Galactic Storm”.

This is a For Want of a Nail story, spinning out of the Avengers crossover “Operation: Galactic Storm”. Named for the then-recent first Gulf War, that crossover saw the Avengers sucked into an intergalactic war between the Kree and Shi’ar empires. In the actual crossover, the Shi’ar (who are nominally allies with Earth through the X-Men) won. In these issues, The Watcher looks at what would have happened if the much more militaristic and genocidal Kree had won.

As punishment for The Avengers (and other Earth heroes) constant interference in Kree affairs, the Kree flat out blow up Earth before a captive Captain America’s eyes. They follow this up with the destruction of the Shi’ar throneworld, and a bloody campaign of conquest across known space. Iron Man and Clint Barton, currently using Pym Particles to be the size changing Goliath, are the only two Avengers at liberty in Kree space and will need to free Cap if they have any chance of rallying and such a move will require some sacrifices…