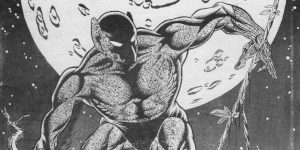 Welcome once again to a new Fabulous Find post. This week I’m sharing an old fanzine, though it’s a recent addition to my collection; Woweekazowie! # 2. This fanzine was published in the Fall of 1976. I am not entirely sure who the actual publisher was. In Dale’s Comic Fanzine Price Guide (2015 edition) it is listed as being put out by Peter Iro, though it was edited by Dean Mullaney. And then in the indicia, it states that the publishing address belonged to Willie Blyberg! So any or all, or even a combination of these three might have been responsible. Your guess is as good as mine!

The fanzine is thirty-six (36) pages, including the covers and it is digest sized, i.e. 5 1/4 x 8 inches. And yes, that’s Marvel Comics’ Black Panther featured on the cover.

Within the fanzine is a host of great articles, interviews, and of course, fan art. Here is the illustration on the inside front cover:

Following that art is an editorial by Mullaney, a Storm article by Bob Rodi, with art by Rodi himself. Next up is a six (6) part interview with Don McGregor. Lots of art illustration this interview, but here’s my favorite piece, drawn by Mark Gruenwald, who was more known for his writing talents, rather than his art. But I think this piece is great.

Following this interview is part two of a “Confrontation between Captain America & the Red Skull”, written and illustrated by Jack Frost. Part one appeared in the first issue of this fanzine. Next is a full page drawing by Blyberg, that may have originally been meant as a cover. Take a look:

Next is an article written by K. J. Robbins, entitled; “Super Friends and Prisoners: A Look at Marvel & National’s Other Medium Adaptations”. This article takes a look at television and movies featuring the comic book heroes and other characters found outside the comic book page. Illustrating this is a nice Tim Corrigan Justice League of America piece.

Next up is a two (2) page Don McGregor checklist. Following this is an article by Peter Iro, entitled; “Of Kings, Kingmakers and Pretenders to the Throne”. This article looks at both Marvel and DC Comics and there various mythologies. The article is illustrated by Iro and Frost.

Following this is; “It’s the Real Thing: A Review of Mark Gruenwald’s ‘A Treatise of Reality in Comic Literature'”. This review is written by Kim Thompson. The last article is entitled; “Feminism and the Ready Made Superwoman”, written by Mary Jo Duffy.

Then the fanzine is concluded by a seven (7) page strip by Willie Blyberg featuring his superhero character; Victory. And then we get a one (1) page letters column on the inside back cover and the rear cover, drawn by Iro, featuring Marvel’s Killraven.

Hope you have enjoyed taking a look at this fanzine from 1976. I know I enjoyed sharing it with you. So that wraps things up for this edition of Fabulous Finds, but I hope you come back next week for a new RETRO REVIEW or another Fabulous Find, depending on how things shake out!