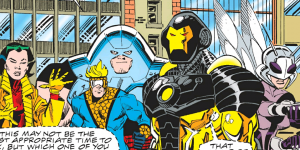 Welcome back (once more) to Strange Times & Places, where I’m still Avengers: Endgame by discussing A-Next #1.

This is a Royale With Cheese, spinning off from a For Want of a Nail story. It’s part of the MC2 universe, of which Spider-Girl was the flagship character. Many years ago, around the time Spider-Man lost his leg and was forced into retirement, The Avengers went into battle in a parallel reality and won at a heavy cost that broke them up.

Kevin Masterson is waylaid by Rock Trolls as he leaves the now decommissioned Avengers Compound with his late father’s Asgardian mace – now a powerless keepsake, so far as he knows. The call goes out from the compound and nearby heroes respond to the crisis at hand, but a stronger force is behind the Trolls’ attack and the heroes might not be able to handle it without more assistance…