Fabulous Find: Merry Christmas From Me To You

Thank you for finding you way back to this week’s Fabulous Find.  But I should be honest, and say right up front, this post really isn’t about one of my finds, but simply a wish of Merry Christmas and Happy Holidays to all my readers, friends and family.

But in doing so, I’ve dug out some Christmas artwork/images from Marvel Comics that I’ve been able to uncover and will share with you today.  SInce Christmas eve comes first, here a nice splash page from Nick Fury, Agent of S.H.I.E.L.D. # 10.  It is pencilled by Frank Springer and inked by Johnny Craig.

I know this book didn’t get a lot of love after the great Jim Steranko left the book, but look at this page, it’s terrific: 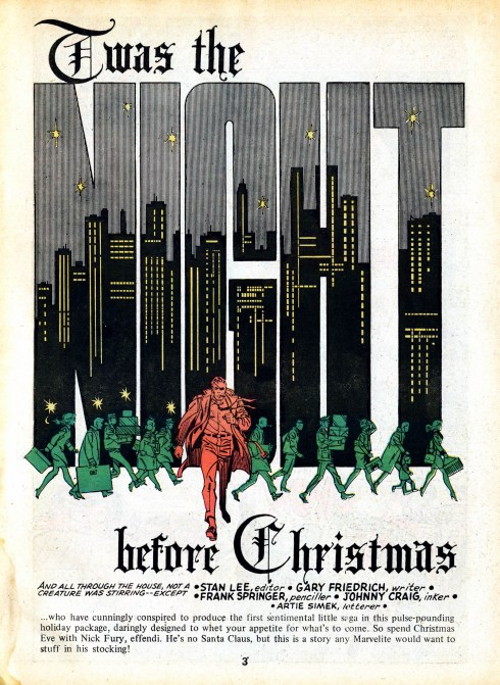 I love the small print caption below that says, “So spend Christmas eve with Nick Fury, effendi.  He’s no Santa Claus, but this is a story that any Marvelite would want to stuff in his stocking!”  Get’s you right into the Christmas spirit!

Next up we have an image from the 1974 Marvel Treasury Edition featuring the Avengers, plus a special guest, Stan “the Man” Lee! 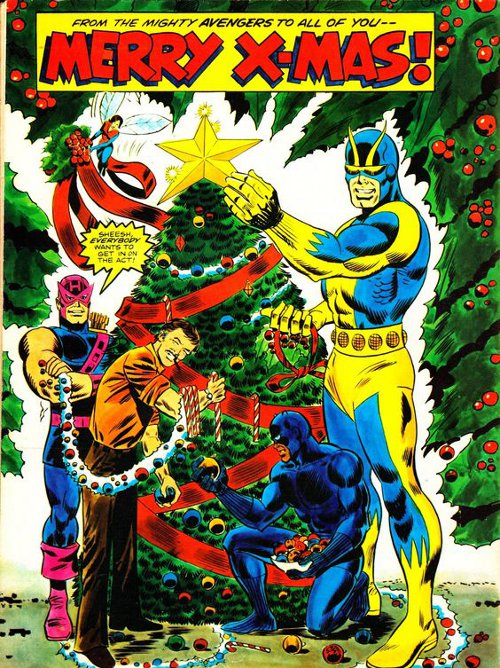 I’m not sure who drew this one, John Buscema?  John Romita Sr.?  Stan might have actually been drawn by Marie Severin, looking at the face.  What do you all think, one artist of multiple artists?  And where are the big three Avengers, Captain America, Iron Man and Thor?  Actually it’s nice to see the other Avengers represented here.

And lastly an image from the 1976 Marvel Treasury Edition: 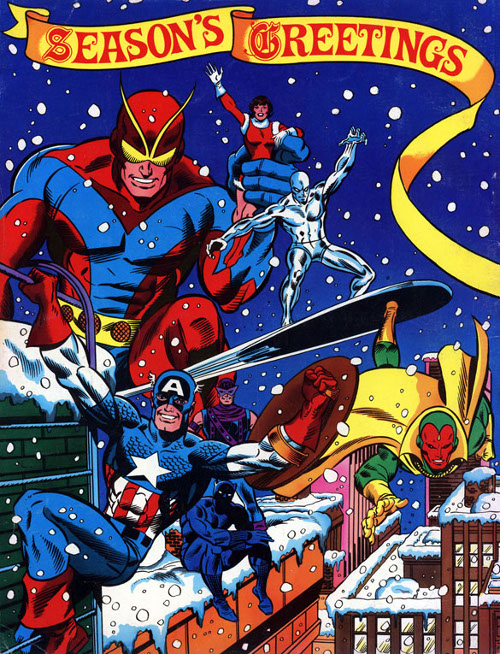 As you can see by my caption, this one is drawn by Gil Kane and John Romita Sr.  This one also features the Avengers, with Captain America front and center with a different special guest!  This time it’s the Silver Surfer, a character not often associated with the Avengers.

Hope you liked this quick Season’s Greeting, Happy Holiday, Merry Christmas post from me to you!  May you spend the season with someone you love and care about and be it a safe and healthy one, as well.

Take care my friends and I’ll … being seeing you …