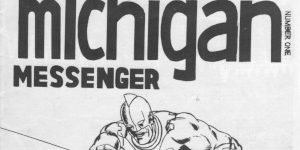 Hello everyone, I’ve been missing in action since the end of last year. I thought I would retire my columns after submitting them for the past ten (10) years. Yikes, that’s a long time writing for the Back to the Past website! But I received an outpouring of requests to continue, even at a reduced state. So for the foreseeable future, I’m retiring my RETRO REVIEW column and will only be doing Fabulous Find columns. I will try to adhere to a once a month schedule if I can. So anyway, for my first blog post/column here is a brand spanking new Fabulous Find.

Today I’ll be taking a look at the Michigan Messenger # 1 fanzine. This first issue is dated in the indicia as July 1968. It is planned as a monthly publication for fans of comic art who dwell in the State of Michigan, as well as, neighboring areas.

The issue sold for a whopping 20 cents at the time. An interesting fact, at least I find it interesting is that there is just not one (1) editor,but three (3)! First up is Peter Jaksa, secondly, Ron Norton and third is Marcellus Crim. Jaska and Crim hail from Detroit and Norton from Michigan Center.

This first issue leads off with two very short editorials, one from Marcellus and another from Ron. This first interior page contains the editorials, as well as, a Hawkman drawing by Ron, based on the work of Joe Kubert.

The whole zine only weighs in at eight (8) pages, but besides the covers and the editorial page, the editors treat the readers with a short story, entitled; A Darkless Night, written by Ron Norton. It is illustrated by Ron, as well.

Next up is a one page comic strip entitled; The Defenders, written by Jaska and drawn by Crim. The lead character is called Space Crusader, if you’d like to know!

Following this short strip is a report on the 1968 Detroit Triple Fan Fair convention held in Detroit. Accompanying the report is another illustration by Rich Buckler, this one featuring Flash Gordon.

Next is a page of advertisements for other fanzines available, or soon to be available, at the time. First is Intrigue # 3, from Rich Buckler. But per the 2015 Dales’s Comic Fanzine Price Guide only two issues were published, so this third issue may never have seen the light of day.

The second fanzine advertised is One Step Beyond # 1, which was published by Jim Doerr and featured a one page Gene Klein article. Why should you care? Well, you should care, because Gene Klein is no other than Gene Simmons of KISS fame! It also included a nine page Defenders strip by the Michigan Messenger editors; Jaska and Crim.

And the third fanzine advertised was No-Eyed Monster, vol. 3, number 1. This was a science fiction and sword & sorcery fanzine published by Norman E. Masters, who was also located in Michigan.

But back to the Michigan Messenger, this were wrapped up on page seven (7) with the Messenger Minutes, which is the letters page for the fanzine. The editors chose to print letters from two fans with different opinions of the place of nudity within fanzines, rather than comments on previous issues, since there had not been any previous issues! This page also presented some artwork from Ron Norton.

And lastly, the rear cover was a nice Enemy Ace illustration by Norton, again aping Joe Kubert’s style, since he was the regular artist on the Enemy Ace strip from DC Comics at that time.

All in all, not a bad first issue. Some decent art, some useful information and all at a cheap price, and of course, directed towards comic book fans within the State of Michigan.

I love to find fanzines produced here in Michigan and it’s also nice to see art by future comic book professional artist, in this case the Rich Buckler work showcased within this first issue.

Hope you enjoyed my look at this Michigan home grown fanzine and hopefully I’ll be back in March with a look at another Michigan fanzine. I’ll keep you guessing for a couple of weeks.

Till then, be seeing you …