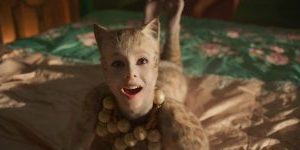 That was the question posed to me while waiting in line to see Star Wars: The Rise of Skywalker with my friends (the same friends with whom I met Tommy Wiseau and who showed me Ryan’s Babe for the first time) on December 14, 2019. It lead to an enjoyable night out, but I have not known true peace since the credits rolled on that movie.

A kitten named Victoria is abandoned by her owners in a London alleyway and quickly taken in by a semi-magical tribe (a mix of strays and indoor/outdoor cats) known as The Jellicles. As she meets their members and learns their ways, she finds that tonight is the night of the Jellicle Ball – a massive gathering with singing and dancing wherein their leader, Old Deuteronomy, selects a worthy cat to ascend to the Heaviside Layer and be granted a new life.

The Academy Award winning director of The King’s Speech, Les Miserables, & The Danish Girl, based on the incredibly long-running and award winning musical of the same name which was written by one of the most successful songwriters in musical theater based on a book of poems by T.S. Elliot. The film version stars a mix of pop-stars (Taylor Swift, Jennifer Hudson, and Jason DeRulo), popular comedians with a foot in film and musical theater worlds (Rebel Wilson and James Corden), and well-respected actors (Sir Ian McKellan, Dame Judi Dench, Ray Winstone, and Idris Elba).
And despite having all of those points in its favor, things that would surely appear as a surefire success in an algorithmic analysis, it sucks so bad that it’s amazingly fun.

This film is like a train wreck – you don’t want to keep looking, but you simply cannot look away. They tried really hard to take a plotless musical about some cats competing for the chance to die into a movie with some sort of plot, and they succeed to an extent, but the photo-realistic CGI cat people and the holdovers from the stage version ultimately render it one long acid trip you can safely watch with grandma.

Category: TV & MoviesBy Chris WalkerJanuary 19, 2020Leave a comment
Tags: 1 out of 51 Out of 5 Would RecommendMusicalPoor Life Choices Made By ChrisTaylor Swift