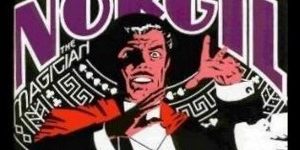 Greetings and salutations friends, fans and family.  It’s time once again for a new Fabulous Find and this week I’ve gone to my bookshelf and pulled off the shelf, two books written by Walter Gibson, writing under the pseudonym of Maxwell Grant.  The books in question are; Norgil The Magician and Norgil: More Tales of Prestigitection.  The books were published in 1977 and 1979 by The Mysterious Press.

Here is the cover of the first book: 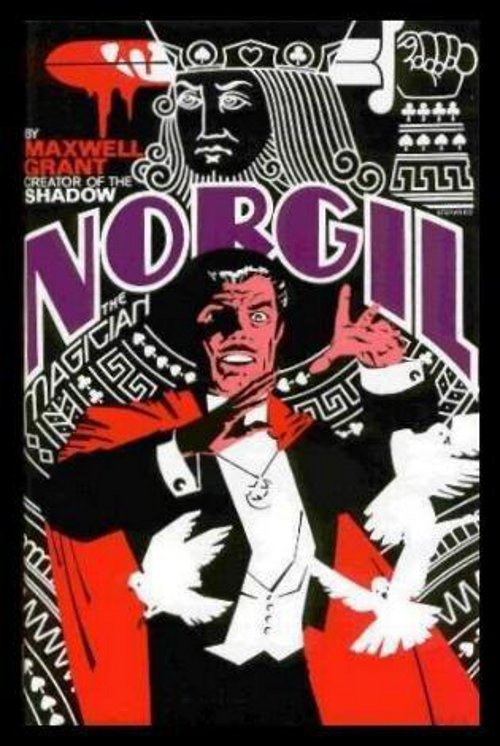 The cover of this hardback book is done by none other than Jim Steranko.  Yep, the guy famous for doing those great Nick Fury Agent of S.H.I.E.L.D. comic books for Marvel Comics back in the late sixties and early seventies, plus quite a few other great comics, as well.

The book itself features reprints of eight (8) short stories featuring the magician, Norgil, as written by Grant/Gibson from the pulps.  Each story employs a famous stage illusion as a plot device, and Norgil becomes a representation of several real-life magicians who made those tricks popular.  Eight of these long-lost stories are collected for the first time in this volume, including:

There is also a seven (7) page introduction written by Walter Gibson just for this edition. 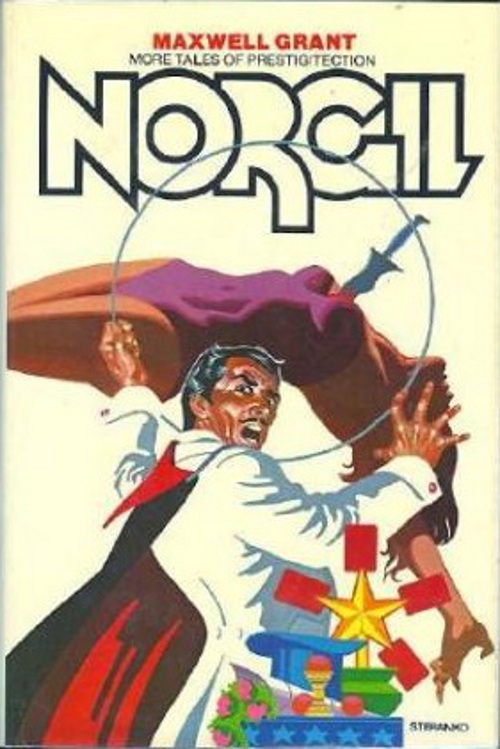 In this book, Norgil the Magician returns to battle the giants of crime in this second series of adventures. Using elements of stage magic and marvelous illusions, the fearless crime-fighter displays the versatile skill of a Houdini in one story and The Shadow in another.  Like the first book, this one reprints eight (8) stories from the pulp magazines of the thirties.  This issue reprints the following stories:

“The Ghost That Came Back” from Crime Busters August 1938
“The Silver Venus” from Crime Busters September 1938
“Double-Barreled Magic” from Crime Busters November 1938
“Magician’s Choice” from Crime Busters December 1938
“Old Crime Week” from Crime Busters February 1939
“Murder in Wax” from Crime Busters April 1939
“The Mystery of Moloch” from Crime Busters June 1939
“$5,000 Reward” from Crime Busters July 1939
This book also features a new three (3) page introduction written by the author, Walter Gibson, again writing as Maxwell Grant.  Walter B. Gibson (September 12, 1897-December 6, 1985) was an American author and professional magician best known for his work on the pulp fiction character The Shadow. Gibson wrote more than 300 novel-length Shadow stories, writing up to 10,000 words a day to satisfy public demand during the character’s golden age during the 1930s and 1940s.
These stories are fun and worth checking out, and needless to say, the books are very collectible due to the nice Steranko covers!  I understand there was a third book in the series, entitled; The Blue Pearls, also written by Gibson/Grant and published by Peril Press in 2013, but this may have only been available in digital format.  I do not own this book/digital edition, but I believe it is maybe longer than the stories reprinted in the two books I own.  And sadly, it does not have a Steranko cover to help sell it.
If any of my readers own or are familiar with this third book, I’d love to hear about it from you!  And as always, I’d love it if you took the time to leave me a comment, even if it’s only to say you read my post.  It’s always nice to know I’m reaching my intended audience and if they are reading and are actually interested in my posts!
So with that said, I’ll sign off.  Hopefully you will be back next week for a new RETRO REVIEW and back again in two weeks for the next Fabulous Find!  Be seeing you …
Category: Comic BooksBy Greg TurnerJanuary 26, 20184 Comments
Tags: Fabulous FindMaxwell GrantMysterious PressNorgil More Tales Of PrestigitectionNorgil The MagicianPeril PressRetro ReviewSterankoThe Blue PearlsWalter Gibson