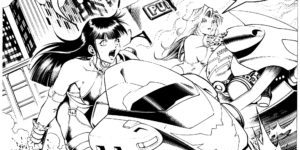 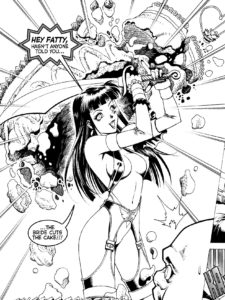 Welcome back to Strange Times & Places, where we’re turning our eyes away from the big two and towards the classic pin-up horror heroine Vampirella as we read the two Vampirella Manga ashcan specials.

These would be imaginary stories, placing monstrous femme fatales Vampirella and Pantha in thirtieth century Neo-Tokyo for reasons of aesthetic and to take advantage of Japanese storytelling tropes.

In Vampirella Manga 2999, Vampi and Pantha face off against a rampaging giant robot named Sumo Erectus. The outmatched lady monsters are rescued by fellow hero Johnny Banzai…before discovering that he’s the real bad guy, having sent the robot in an underhanded attempt to win Vampirella’s heart! 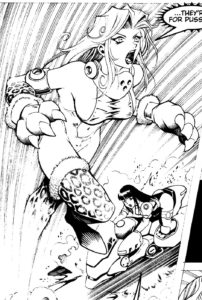 In Vampirella Manga 3000, Vampi & Pantha are sunbathing on an island vacation when the vampire vixen rescues a young woman being pursued through the jungle by some thugs. She finds that the island’s ruler selects young women to be his brides, whether they want the honor or not, and that Pantha’s the next victim destined to walk down the aisle!