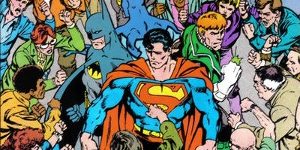 Welcome back all, this week I’m once again going into the DC Comics annex of the comic book vault and I’ve pulled out the mini-series; Legends.  There were six (6) issues in this mini-series and this is the comic book/series that John Byrne made his DC debut.  These issues came out just before his Superman update hit the stands, that I wrote about a couple of weeks ago (If you didn’t read that, please check it out!).  He did all of the covers, both pencilling and inking them.

Here are the first two covers: 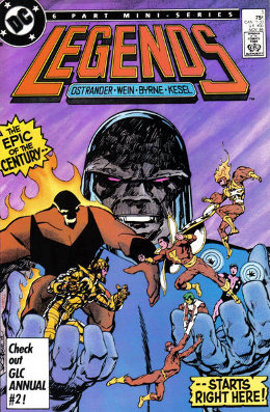 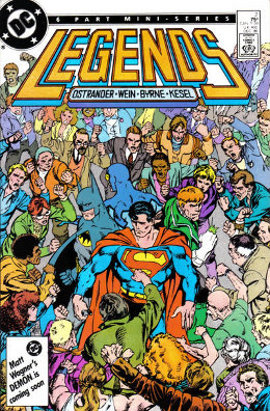 The first issue starts with Darkseid planning to destroy the legend behind Earth’s superheroes. Creating the monstrous villain Brimstone, he uses it to attack the current Justice League (led by the Martian Manhunter). Brimstone defeats the JLA.  Firestorm makes an appearance and Shazam (aka Captain Marvel) fights a villain named; Macro-Man, and accidentally kills him, causing the Big Red Cheese to revert to Billy Batson and swear not to use his powers ever again.

In issue two, Darkseid’s plan continues and he uses his lackey, Glorious Gordon Godfrey (disguised as political activist G. Gordon Godfrey), to launch a crusade vs. the heroes, using Macro-Man’s “death’ as the catalyst. Then President Reagan, influenced by Godfrey, creates an executive order banning heroes from action.  Superman is the first to accept this new status quo! 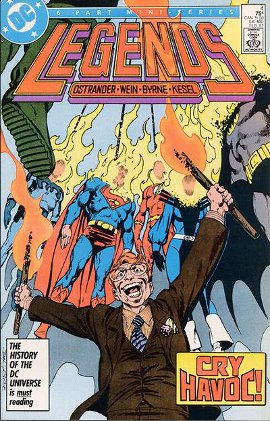 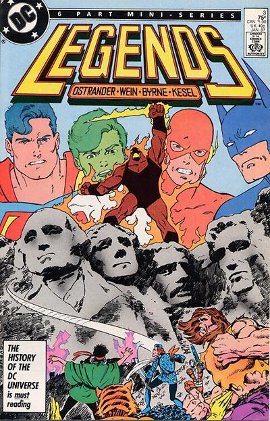 In issue three, President Reagan’s executive order goes into effect, and the heroes are either forced underground when in action, or to retire. In fact, this causes the the Martian Manhunter to dissolve the Justice League.  As Godfrey’s speeches continue to rally an anti-hero fervor, Robin (Jason Todd) is injured by a frenzied mob. Brimstone is revived and faces off against the new Suicide Squad (aka Task Force ‘X’, which, as you know, is composed of villains making deals with the govt. for their freedom).

In issue four, Darkseid’s plan to destroy all of Earth’s heroes via attacking their legends is succeeding, thanks to G. Gordon Godfrey’s actions.  The Phantom Stranger, meanwhile, has been viewing these events, and warns Darkseid his plan will fail, although he is helpless to actually interfere in these events.  I find this interesting, since I believe that the Stranger had never had any dealing with Darkseid previous to this mini-series.

I also want to mention that for some reason when Darkseid uses a Boom Tube, it’s not referred to as a Boom Tube, but by some other term.  Did the writers forget Jack Kirby‘s term, or just didn’t care for it and decided to change it.  If so, DC Comics has gone back to calling this matter of travel a Boom Tube!  Sorry that’s off topic, but it is something that has bugged me no end!

Here are the last two covers to the mini-series: 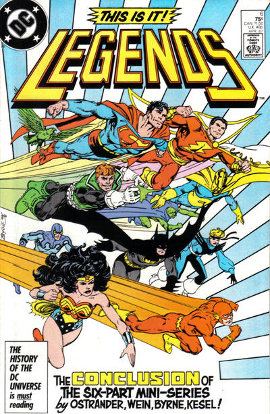 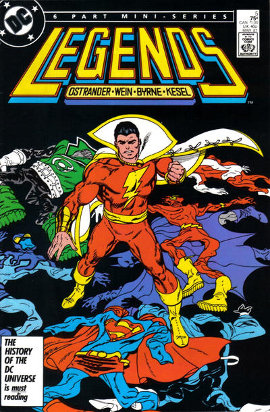 In issue five, Darksied’s plan has almost reached its conclusion, and the heroes rise up in a final standoff vs. Glorious Godfrey in Washington, D.C., where he plans a huge rally to crush the heroes once and for all. Billy, realizing things have really gotten worse for the heroes, decides he has to become Captain Marvel once more to aid them.

And in issue six, the final issue of this mini-series, Glorious Godfrey unleashes a final assault vs. the heroes in Washington, D.C. with a frenzied mob.  They are stopped thanks to Robin, who appears with young children, forming a human shield around the heroes. Godfrey slaps a child who refuses to move out of the mob’s way, which then awakens the mob, and turns them against him. He retaliates by using Apokolips warhounds to attack everyone.  The heroes successfully defend them the people but Godfrey steals Dr. Fate’s helmet, and is defeated by the helmet itself, when he attempts to use its powers for his own purposes. Thus Darkseid’s plan fails and the mini-series ends.

Before I wrap things up, I better give proper credit to the creators that were involved in this mini-series.  As I mentioned earlier, John Byrne pencilled and inked each of the six covers and he also supplied the interior pencils, as well.  The inks were provided by Karl Kesel for all of the issues, except for the last ten pages in issue six.  Those inks were completed by Dennis Janke.  The plot for all six issues was completed by John Ostrander, with the script supplied by Len Wein.

This mini-series was a great place to start at the time, with DC’s attempt to re energize their staid comic book line and history, at this time.  This series led directly into the John Byrne revamp of Superman, George Perez was starting things over with the Wonder Woman book and right after this, a new Justice League book was published, starting over with a new number 1 issue.  Plus a new Suicide Squad comic was also launched, as well as, a new Shazam comic book.

Quite a lot of changes in a very short time, but as everyone knows, DC has dad to reboot at least two or three times since, as well.  I also just read that Bendis is going to write a brand new Superman do-over, just like Byrne did in 1977!  Good luck DC, I really do hope you’ll eventually get it right!

Thanks for stopping by and be sure to come back next week for a new Fabulous Find.  And hopefully I’ll be back with another RETRO REVIEW in two weeks.  Til then, be seeing you …