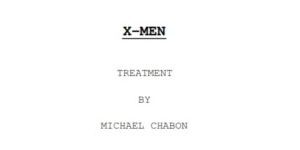 Welcome back to Scripting Errors, where we look at movies that might have been! Today’s entry would more accurately be called a MisTreatment, since I selected a 19 page X-Men treatment (the first step in the script writing process) rather than a full script.

This post is illustrated with fan art by Scott Ngo, check out his DeviantArt page here.

comic writer) Michael Chabon during an unsuccessful foray into screenwriting.

In the wilds of Canada, a naked man with metal claws flees from heavily armed soldiers. His only identifying mark is a barcode implant on his neck, labelling him “Logan”. He escapes (after being shot with what seems like a tranquilizer dart) and is rescued by the X-Men, who are slow to trust their mysterious houseguest.

In California, a young mutant named Jubilation Lee discovers that the people she believes to be her parents aren’t. She runs away from home and quickly finds that every trace of her existence is gone – no birth records, no state ID, not even a record that the Lees every resided in what she knows as her childhood home. 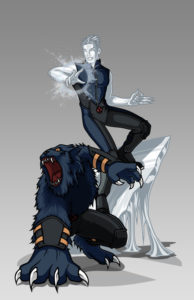 The mysteries surrounding Logan and Jubilation will bring them and The X-Men into deadly conflict with powerful anti-Mutant forces before all is said and done.

I’d love to see Chabon get the chances to develop this as a mini-series, graphic novel, or novel. It’s nifty superhuman conspiracy tale that uses the established X-Men mythos while doing something fairly unique, but is entirely too ambitious for its era and medium. Read it here.