For this week’s RETRO REVIEW, I’m looking at the two issue series; The Incredible Hulk: Future Imperfect that was published by Marvel Comics.  The first issue is dated December 1992 and the second issue is dated January 1993.  Or are they?  My copies were bought fresh off the comic book rack when they came out and are both clearly marked first printing in the indicia, but here’s where it gets strange.  The first issue of this short two issue mini-series is actually dated January 1993 in the indicia and the second issue is dated December 1992 in the indicia!  Someone probably had just one job and they screwed it up royally!

The covers to both issues are pencilled and inked by George Perez.  Here is the cover to the first book: 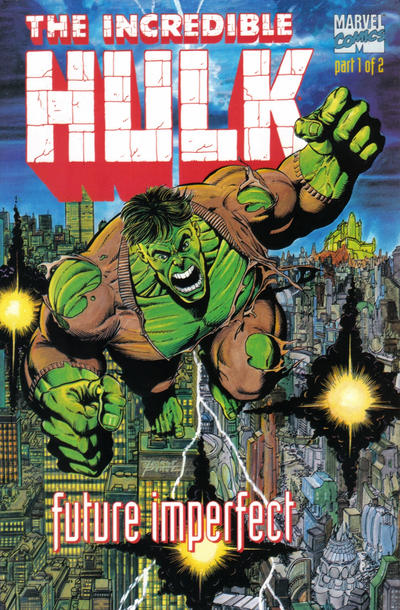 As you can see it’s a great cover with the Hulk leaping straight out at the reader.  Hands curled into fists and his left arm cocked back to deliver a powerful punch.  You can also clearly see Perez’s signature on the building just below the Hulk’s right foot.

Now take a look at the companion cover from the second and final issue of this mini-series: 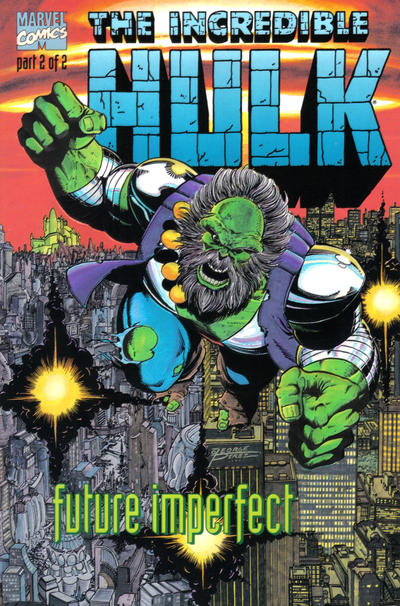 As you can see, this cover features the Maestro also leaping towards the reader, both hands curled into fists, but he has his right arm cocked back to deliver a powerful blow.  Pretty much a mirror image of the Hulk cover from the first issue.  Again you can see the Perez signature on the building below the Maestro’s left foot.  Pretty sweet!

The story opens in the future, though the year is not named (later it’s said to be about ninety years from 1992/93).  The place is Dystopia, where we meet a group of insurgents, headed by Janis, who turns out to be the great granddaughter of Rick Jones.  The security staff of that time are out hunting Janis and her fellow insurgants.

This is when the Hulk finally appears, but with no explanation on how he got there.  Janis takes the Hulk to see his old friend, her great grandfather, Rick Jones.  Rick explains to the Hulk how the world got this way.  There first meeting takes place here, what I call the hall of fallen heroes: 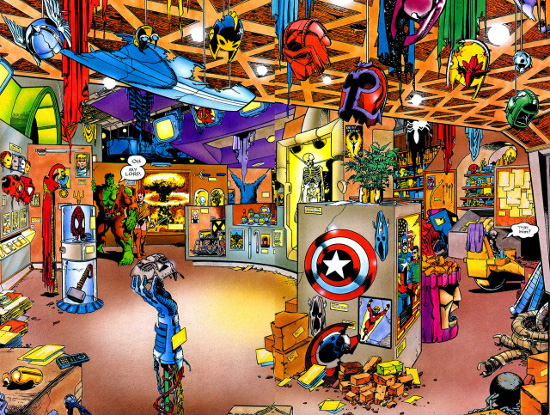 I could spend an hour just looking at this two page spread, identifying each of the heroes and villains, as well, weapons and uniform parts and pieces!

The scene then switches to the Maestro and his scientists torturing a capture rebel to determine where the insurgents are hiding.  Peter David then gives the reader a flashback and we finally see part of the plan to bring the Hulk to this future to battle the Maestro by using Doctor Doom’s time machine/platform!

Issue two begins with the Hulk and the Maestro joined in battle.  Their battle is spread over thirteen pages with the Maestro coming out on top, eventually breaking the Hulk’s neck!  But is is not dead, just temporarily paralyzed apparently.  One of the Maestro’s slaves named Betty, a Betty Ross look-a-like, is tasked to care for the Hulk.

The Hulk is held prisoner for quite a while as he slowly recovers.  Eventually he is healed and immediately breaks free.  The Maestro tracks the Hulk back to Rick Jones hideout and kills Rick.  Which causes the Hulk to really get mad, and as we all know the madder the Hulk gets the stronger the Hulk becomes!  Hulk, with the help of Captain America’s shield and his own fists, as well as, the timely use of Doom’s time platform defeats the Maestro.

I won’t reveal where the Hulk sent the Maestro in time, but will say it’s a very fitting place/time.  This really is an excellent, out of continuity, Hulk tale and David and Perez use the ninety-six pages allotted to them to really tell and show one of the better all-time Hulk stories!

I highly recommend this two issue mini-series and if you don’t already own it, definitely you should search it out and add it to your collection!  I really enjoyed reading it all over again and I’m sure you will too.

Thank you for your patronage and hope you’ll be back next Friday for a new Fabulous Find and, of course, I’ll be back in two weeks with another RETRO REVIEW!  Nuff said.