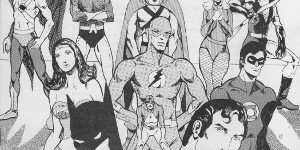 Hello there, fabulous friends, fans and family, and welcome to another Fabulous Find.  I’m here again to share one of my cool (at least I think they’re cool) collectibles from my collection.  This week I’ve pulled a fanzine entitled; The Complete Justice League of America Reader.  It was published in 1973 by future comic book professional; Mark Gruenwald, with help from David Lofvers.  As stated within the fanzine, the purpose of the publication “is meant to be the fan’s definitive guide to the comics’ longest running superhero team”, the Justice League of America from DC Comics.

Within it’s scant twenty-two (22) pages, Gruenwald and Lofvers provides everything a fan would ever want to know about the first one hundred (100) issues of the Justice League of America comic book.  Plus the three issues that the JLA first appeared within the pages of the Brave and the Bold comic (issues 28 – 30).

And writer Gruenwald also provided the cover, as well.  Here it is in all it’s black and white glory: 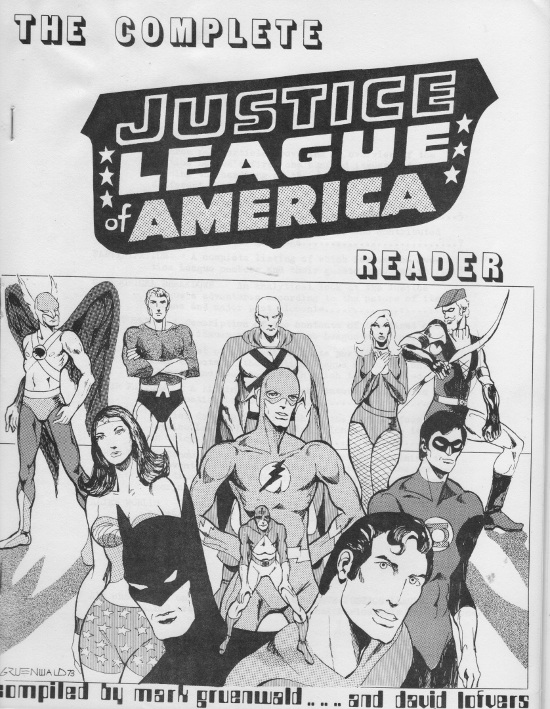 In the days before this information could easily be found on the internet, this kind of information was extremely valuable to the comic book fan who wanted to know all there was to know about their favorite comic books and heroes.

The fanzine opens with a three (3) page article providing an overview of the JLA’s three Brave & Bold appearances and on the first one hundred (100) issues of the JLA titled comic.

Gruenwald and Lofvers then provide biographical data on each of the Leagues many members.  Things like a description of their powers and some background information on each character.  They also proved the credits to each of the books, including the writers, pencillers and inkers who contributed to each issue.  Since DC did not provide this information in the early days, this was great information.

They go so far as to list which heroes appear in which issues, even a categorical breakdown based on the plots of the individual stories.  Plus various incientia of interesting facts pertaining to the JLA organization, it’s members, etc.

Gruenwald and Lofvers also list which characters were featured on each cover, plus a listing of the villains that the JLA faced within each individual issue.

Finally they wrap things up with a concise explanation of the concept of Earth-One and Earth-Two and then a short feature describing the alien worlds mentioned within the pages of the JLA adventures.

Wow, that’s a lot of information within a small amount of pages.  And again remember that this information could not be found anywhere except within the comics themselves back in 1973, as the internet was still quite a few years in the future.

If there was anything that a fan could complain about, well maybe, the fact that besides the cover, there was no additional artwork within fanzine.  But that’s a small quibble to such an informative fanzine!  Today, maybe it doesn’t have the value as a reference source, as it did in 1973, but I still find it fascinating and well worth including in my collection of fanzines.

Hope you enjoyed a look at this Fabulous Find and please check back next week for a new RETRO REVIEW.