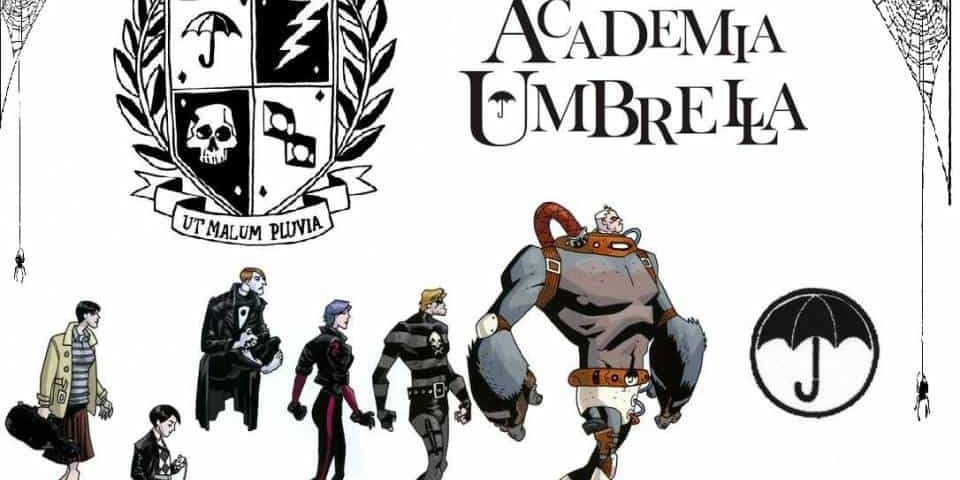 Welcome back to Consigned, Cool, & Collected, where the collectibles experts at Back to the Past stop to smell the roses and wax lyrical about the cool stuff we sell. This week’s piece is a 2007 promotional poster sent to comic shops by Dark Horse Comics for their then-upcoming mini-series The Umbrella Academy. 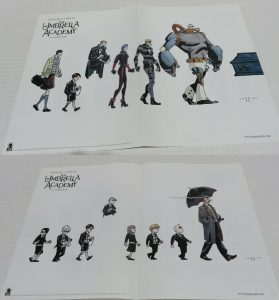 Picture it: it’s 2007. George W. Bush is still President. Facebook has just opened membership to the general public. Twitter is taking its first shaky steps into the world. And My Chemical Romance, a band that had been popular with the moody-teens-in-Hot Topic-skinny-jeans crowd for a few years already, was on tour to support their biggest album yet, The Black Parade.

It was into this world that Dark Horse Comics announced that they would publish a mini-series, featuring art from up-and-coming Brazilian artist Gabriel Bá, written by My Chemical Romance lead singer and lyricist Gerard Way. The comics community was skeptical: pop cultural figures from outside the industry writing comics can be hit and miss and Way’s status as a teen idol made him doubly scrutinized. Seventeen-year-old me, in particular, was disinterested because I was Snooty Classic Rock Teen who hung around with Pop Punk Emo Teens. I was, therefore, sick and tired of hearing about how amazing The Black Parade was. I didn’t need Gerard Way invading comics too.

Ads like this promo poster sent a confusing message to those of us who were skeptical: it looked really, really weird. Good weird. Like Grant Morrison’s Doom Patrol kinda weird, and that  Doom Patrol run is legendary. Heck, it helped to launch DC’s Veritgo imprint. Whatever we skeptics expected from the mind of a teen idol sadboy rocker, a giant gorilla with the incongruous head of a man and a boy with tentacles coming out of tummy wasn’t it. 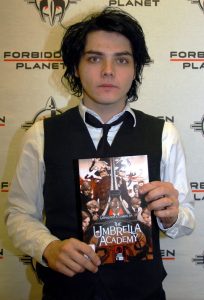 Gerard Way posing with his first, but not last, TPB.

Naturally, we now know that the series was amazing. It turns out that Mr. Way had always had ambitions for comic book greatness and the whole “Rockstar teen idol” thing began as a creative side job. I ended up spending most of my senior year trying desperately to convince the aforementioned pop-punk emo teens that they should give Umbrella Academy a try. I had little to no success, as comics weren’t “cool” yet, though I imagine they’ve checked out the Netflix TV series. Way went on to launch the sadly short-lived Young Animal imprint at DC Comics in 2016, bringing that early Vertigo energy he demonstrated on Umbrella Academy back to the place that created it. He’s a cult-favorite in two vastly different creative media, which is why vintage promo posters like this can command a $25 asking price.

There are two lessons to be had here:

While the blog is doing its best to help you with that first lesson, Back to the Past’s team of evaluation experts specializes in the second. Give us a call before you take your collection to the dumpster: one never knows where value may hide!