I Heard a Rumor (or “Speculation, In Every Sense Of The Word”) 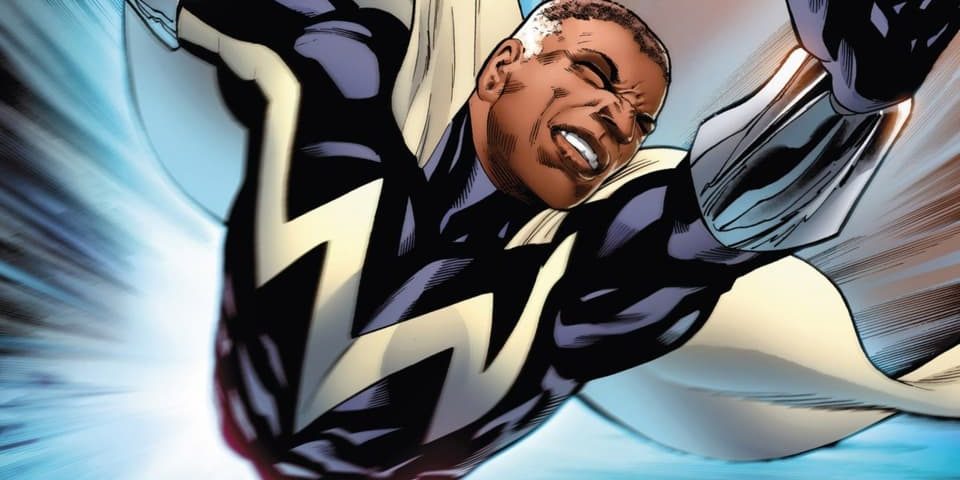 Welcome back to Hammer Drops, where we discuss what realized prices mean in the wider context of collectibles dealing. Today, we’re looking at Lot #212 from our June twelfth auction session, a NM run of Adam: The Blue Marvel #2-5 that sold for $325. Why did a near complete mini-series starring a character you’ve likely never heard of sell for that nice a sum? Read on, Macduff. 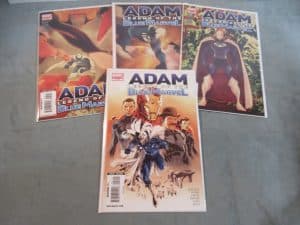 Adam: Legend of the Blue Marvel is a 2008 mini-series from actor/screenwriter Kevin Grevioux, who based the character on one he’d conceived of as a child. Collegiate football star and Korean War veteran Adam Brashear is the lead on a project to produce clean energy using an Antimatter Reactor. Naturally, it exploded and bathed him in exotic radiation. Turned into a living Antimatter Reactor (putting him just this side of Silver Age Superman in terms of power), Adam took up the costumed identity of The Blue Marvel until 1962. His costume was damaged in battle and The Blue Marvel was revealed to the world as a black man, much to the consternation of much of the American populace. No less than John F. Kennedy asked him to retire, and he did so until his arch-nemesis returned in the present and made short work of The Avengers. This lot contained #2-5, most of the story less his first appearance and origin. 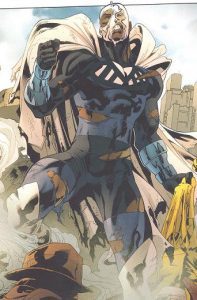 The Blue Marvel stands revealed in 1962.

The character mostly faded into the background for a while after his self-titled mini-series. Writer Al Ewing picked Blue Marvel for his new Mighty Avengers team spinning out of the Infinity event in 2013, thrusting the character back into the limelight. He would remain an Avengers mainstay for the first half of Ewings run and he was folded into the cosmic-level superteam The Ultimates (also written by Ewing) after Secret Wars. He remains a cult-favorite, continuing to make appearances here and there even after the demise of his teams.

Our own Commander-in-Chief, Scott Lovejoy, pointed out that A:LotBM has long been a more valuable series than one might expect. Runs and groups like this one have been running into the ~$100 range for years now, ever since Al Ewing helped make the character a cult-favorite and the most upstanding of Marvel’s not-quite-Supermen. Additionally, sharing a creator with the Underworld film franchise meant that there was a built-in audience of Grevioux fans looking for the comics. But what could be driving the recent jump?

Rumors. The comic version of the character is the teammate and love interest of Monica Rambeau, who recently made a splash with audiences on Disney+’s WandaVision, and it was rumored/speculated that Adam Brasher would be the aerospace engineer friend she referenced midway through the series. That turned out not to be the case, but the fact that The Marvels (Monica’s next slated appearance in the MCU) is said to be casting a “Michael B. Jordan or John Boyega type”- the same type that the upcoming Superman movie written by Ta-Nahesi Coates is seeking – is fueling continued speculation about the character’s debut. The Blue Marvel would be one of The Marvels, after all.

So if you had a copy of his original mini-series, now is a great time to sell it. Value based on rumor is a big gamble, with confirmation or denial changing things in an afternoon. Which is why it pays, often quite literally, to let your pals at Back to the Past check out a collection before you donate it. Just because you haven’t heard of a character or mini-series doesn’t mean it’s not worth something, and its almost a full-time job in itself to keep up with all the rumors in this era of comic adaptation saturation. If you insist on bringing a collection to market all by your lonesome, keep your eyes on Hammer Drops every week for the benefit of our tips and tricks!