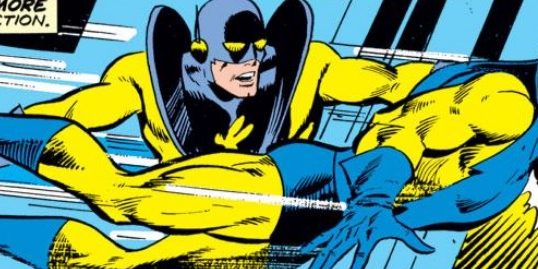 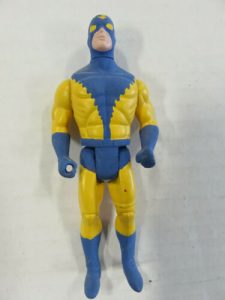 The Whizzer, as seen in the My Hero Collection.

Welcome back to My Hero, our weekly dip into our collection of custom action figures! A lone superfan spent years repainting, resculpting, sewing capes, and generally altering dozens of action figures to capture the likenesses of the most obscure characters in all of comicdom. We were so taken with his life’s work that we bought the entire collection, and it is now our honor to present it to you. Today is the last entry in a four-part examination of the original Squadron Sinister, ending with the last unreformed and still-living member of the team: The Whizzer!

It is worth noting that the Squadron Sinister version represents the second Whizzer in the Marvel Universe, the first being their Golden Age super speedster. The second debuted alongside his teammates in Avengers #69-70. He remained a dedicated team player (unlike Nighthawk and the original Doctor Spectrum) throughout their 1970s appearances, and, sadly, received precious little development other than “the Squadron Sinister’s speedster”. Avengers Annual #8 would reveal that he worked as a chemist for a small-time pharmaceutical company, but even his name (James Sanders) would come later. 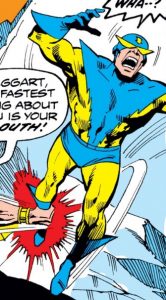 The comic version of The Whizzer. As you can see, the figure is “missing” the shoulder pads.

1981’s Amazing Spider-Man #222 saw the character revamped as Speed Demon and expounded a bit on his origins. He was, simply enough, a chemist manipulated by The Grandmaster into developing a super-speed formula and found the power intoxicating enough that super-villainy just came natural to him thereafter. Using an updated version of the serum that made him even faster, he matched wits against the Webbed Wall-Crawler in a daring crime spree that ended in his capture. Despite his Avengers-level origins, he has largely remained a Spider-Foe ever since and has traded his Squadron Sinister membership card in for stints with the Sinister Syndicate and Sinister Six. Between those gigs, his Sinister Syndicate teammate Abe “Mach-VI” Jenkins (formerly The Beetle) dragged Speed Demon into heroism with the New Thunderbolts, but it didn’t last.

Amusingly, the Earth-S version of James Sanders appeared in the Squadron Supreme mini-series as a minor foe of that team’s heroic Whizzer.

The Whizzer II AKA Speed Demon first came to my attention in his life as a Spider-Man bad guy. Unlike his teammates, Speed Demon has more or less eclipsed his Squadron Supreme counterpart – when Marvel’s Avengers Assemble used a blend of the Squadrons Supreme (names and origin) and Sinister (villainy) as major foes in its second season, Speed Demon was their speedster instead of The Whizzer. Thanks to the name sounding considerably sillier in the 21st century than in 1941, the comic version of the Squadron Supreme member has picked up the name The Blur since 2003 and the only character still going by “Whizzer” is the Golden Age original. If you want an action figure of the Squadron Sinister’s Whizzer, the only place you’re likely to find one is right here in the My Hero Collection. Do you have an action figure collection like this to sell – original art, custom action figures, convention sketches, et al – we want to hear about it, so don’t hold back!