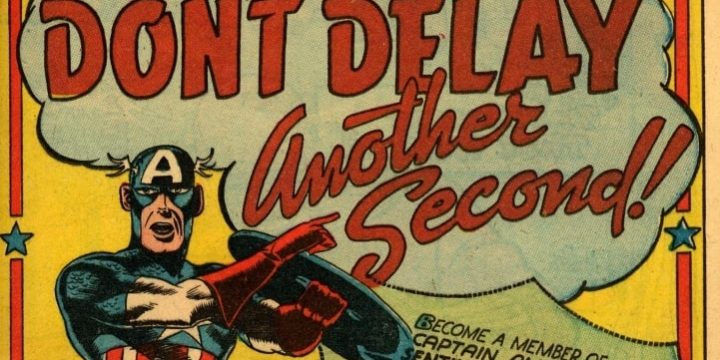 Welcome back to Consigned, Cool, & Collected! In this column, we act as your tour guide to the wonderful items we handle every day. This week’s find is a Captain America’s Sentinels of Liberty reproduction pin from Planet Studios. Produced in 1990, this pin was limited to 2500 pieces. It is based on the pin for Captain America’s golden age fan club.

The Golden Age of Fandom 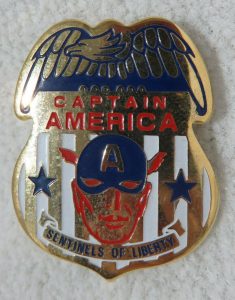 The comic book fan community as we know it today developed in the 60s and 70s. Fans found each other through letter pages, fanzines were published, conventions were organized, specialty shops sprang up, etc, etc. Our own auctioneer extraordinaire Greg Turner wrote extensively about those early fan movements in his gone-but-not-forgotten column Fabulous Finds. Like all Silver Age innovations, however, it was a better-executed revival of a Golden Age standard.

In the Golden Age of the Comics, the 1940s, the primary audience for superhero comics was little boys. Kids love to be part of a club. Old timey comic publishers knew that, and took advantage of it by creating official fan clubs for their biggest comic characters. Kids who sent their allowance in and joined got some signifiers of their membership in return. This usually meant some kind of pin or badge, as well as a membership card. Today’s item is a reproduction of the pin given to members of Timely Comics’ Captain America fan club. We also have a genuine pin from Archie Comics G-Man Club, the official fan club for super FBI agent The Shield, in the Gallery. 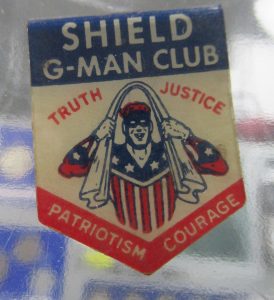 There were many organizations like this run by comic publishers. In addition to the Sentinels of Liberty and the G-Man Club, you had groups like The Supermen of America and the Junior Justice Society of America. As you can tell from the names, many of these organizations had a patriotic bent to them. Superhero comics were morality plays geared at children, and their fan clubs reflected those values. Every club listed in this piece encouraged kids to strive for ideals like truth, justice, courage, equality, democracy and patriotism. The fact that many of these organizations existed during the second World War, when drawing a distinction between the ideals of the U.S. and its allies and those held by the Axis Powers was paramount.

The Junior JSA in particular had a creed that reminded members we were all Americans, regardless of race or creed and it was our duty to stand up for democracy. Considering the ideals touted by these Golden Age comic characters, it shouldn’t be surprising that they produced a generation of comic creators like Roy Thomas, Marv Wolfman, Len Wein, Dennis O’Neil, etc. The social issues tackled by these creators in the pages of The Avengers, Green Lantern, Teen Titans, X-Men, and more were simply the evolution of ideals their childhood comics taught them. 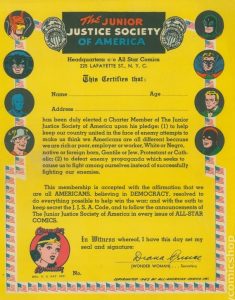 Falling Out Of Fashion

As superhero comics faded away at the end of the 1940s, so too did their fan club organizations. Silver Age fan clubs would largely be run by fans rather than publishers, with all the goods and ills that come with that. The last major “Official Fan Club” that I can recall is the 1994 Power Rangers Fan Club, of which I was sadly never a member. Official fan clubs seem to be dead as a doornail in the 21st century. The ubiquity of the internet means that mail away items have lost pretty well all luster, and the vast media landscape means that creative works survive off of audiences that are basically the size of old fan clubs anyways.

What’s most interesting about these pins is that they’re the kind of collectible item that would easily be overlooked by the uninitiated. The Shield pin has a $75 price tag on it and the Captain America pin is at $110. We even have a plastic version of the Cap pin, a giveaway for the character’s fiftieth anniversary, for $10 in the showroom. There is value here. You just need to know to look for it, and that’s what Back to the Past brings to table when we help you sell your collection. We know exactly what stuff should be Consigned, Cool, & Collected!