Who Is The Fighting Yank? 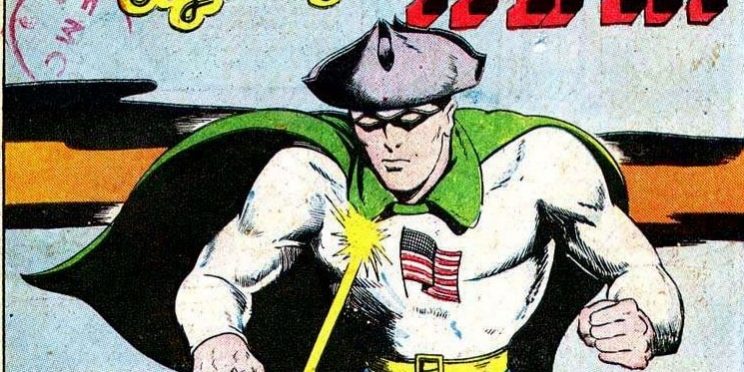 Welcome back to My Hero, wherein we here at Back to the Past identify and delve into the obscure characters from our custom action figure collection. Years ago, we purchased the life’s work of an artist and comic fan whose chosen medium was granting forgotten comic characters the action figure immortality denied to them by major toymakers. We close out our little mini-series about Nedor Comics heroes by looking at their patriotic crusader, The Fighting Yank, in honor of Thanksgiving!

From The Revolutionary War to World War II 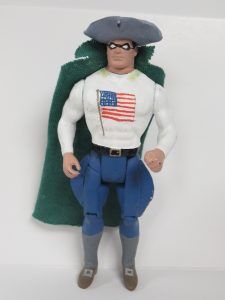 The Fighting Yank as he appears in our Custom Collection. Note the hand-painted flag on his chest.

Debuting in Startling Comics #10, The Fighting Yank is patriotic American Bruce Carter III! His namesake ancestor, Bruce Carter, was a Minuteman under George Washington. He was assigned to deliver a secret message, but was waylaid by British spies en route and killed. His mission unfulfilled, his ghost roamed the Earth for the next 150+ years. By 1941, his great grandson, Bruce the Third, had grown into the spitting image of old grandad. Bruce The First’s ghost appeared to his young descendant and lead him to a green cloak and black tricorner hat. These Revolutionary War era artifacts were enchanted, granting the living Bruce Carter super strength and near invulnerability when he wore them. Devising a simple costume to go with the magic accessories, Bruce became The Fighting Yank!

Unlike a lot of Golden Age heroes, The Fighting Yank didn’t have a traditional sidekick. Instead, his ghostly great-grandad followed him around and aided in his adventures. The Fighting Yank battled America’s enemies at home and abroad across over eighty issues of Nedor titles. That includes 29 issues of his own self-titled series! He faded into obscurity with the cancellation of his series in 1948.

Due to the character’s Golden Age prominence and modern Public Domain status, he’s been quite popular in the last thirty years. AC Comics used the original version as a reoccurring character in their flagship Femforce title. He was killed off in Femforce #35 but since ghosts run in the Carter family, that hasn’t kept him down. AC also introduced an original version of the character, who was a tribute to Joe Simon & Jack Kirby’s Fighting American. 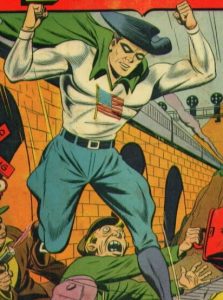 From the cover of Fighting Yank #14. As usual, our customizer nailed it.

Like all of Nedor’s heroes, Alan Moore used The Fighting Yank in his Terra Obscura setting. The Society of Major American Science Heroes, lead by Tom Strange, protect an alternate Earth from one inhabited by Moore’s creation Tom Strong. On that world, The Fighting Yank had a daughter. Back in the day, she was his sidekick Fighting Spirit. In the present, Bruce Carter III has died and become his daughter’s ghostly guide much as Bruce The First once guided him.

Finally, Project Superpowers made The Fighting Yank one of their story’s villains. In a world where all public domain golden age heroes coexist, The Fighting Yank was one of the 40s top crimestoppers. He was tasked by the U.S government with retrieving Pandora’s Box from the Nazis and using it to capture all the evils freed from it. Bruce The First convinced him that included all the other heroes, and so The Fighting Yank turned on his comrades and imprisoned them. In the 00s, an elderly Bruce is visited by the American Spirit. It turns out his ancestor lied to get out of his curse. The old man sets out to right what he once did wrong, unleashing superheroes back into the world at the cost of his life.

As it happens, there WAS a toy named the Fighting Yank. It was Mego Toys’ rip-off of G.I. Joe, released in the 60s. And rip-off is used quite literally here: the line ended when Hasbro issued a cease and desist over a deliberate defect they’d put in the G.I. Joe design that the Fighting Yank copied. If you want the real deal, you need to turn to customizers like the one who made our collection. Despite appearing in comics published by DC (the Tom Strong and Terra Obscura tales), The Fighting Yank has never been touched by DC Direct. But even when an indie comic company gets some toys, some characters will still be left out. We’ll discover that next week when we start looking at the Archie Comics’ Mighty Crusaders sector of our Custom Figure CollectionAnd if you’ve got collection like this– be it original art, custom action figures, convention sketches, whatever – and are looking to sell it, we would love to help you out!