How Powerful is Captain Atom? 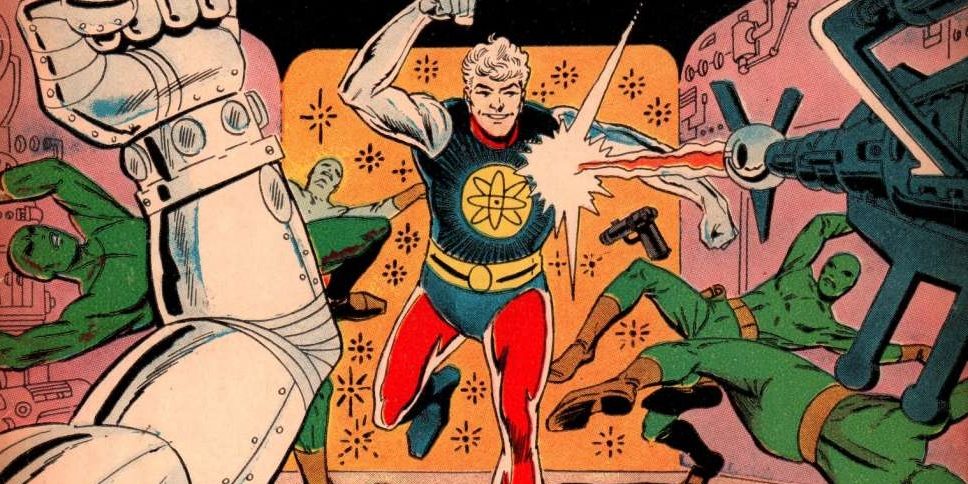 Welcome back to My Hero! Each week, Back to the Past uses this column to tell you why the obscure characters from our custom action figure collection are great! Years ago, we purchased the life’s work of an artist and comic fan whose chosen medium was granting forgotten comic characters the action figure immortality denied to them by major toymakers. We’re still sorting through it all, and we’re making new finds every week! This week’s find, who will soon be available on ebay,is Captain Atom! 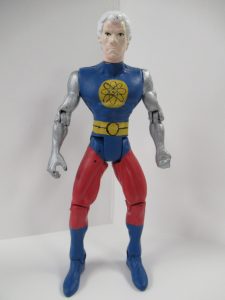 In spring of 1960, superheroes were starting to be a major force in the comic industry after a brief hiatus. Kickstarted in 1956 by DC’s creation of a new Flash, new costumed crusaders slowly began taking over DC’s monthly offerings. Hoping to ride the wave, other companies followed suit, including Charlton Comics. Steve Ditko, then as workhorse writer/artist providing stories for various horror and sci-f anthologies, supplied Charlton Comics with a new hero in Space Adventures #33.

In a tale that worked both as superhero origin and a sci-fi anthology tale. Captain Allen Adam, decorated Air Force officer, gets stuck inside an experimental nuclear missile as it is launched into outer space. His superiors watch helplessly as he’s launched into orbit and then blown to kingdom come. They then watch in amazement as he reappears on the launchpad, glowing and half-naked but otherwise OK.

Crafting a radiation-dampening suit out of diulustel, Captain Adam becomes Captain Atom – America’s most powerful superhero, working directly for President Eisenhower. His first mission is to foil an attempt by the USSR to provoke nuclear war by launching one of their own missiles at themselves and blaming the U.S. – Randian Objectivist Steve Ditko didn’t like Communists, dontcha know.Captain Atom’s feature ran in Space Adventures for nine issues, being axed after Fall 1961’s issue #42. Shortly thereafter, Steve Ditko became rather busy over with his other job at Marvel Comics… 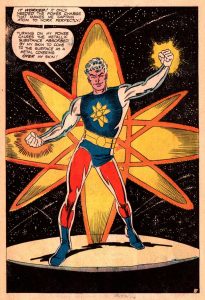 Amazing Fantasy #15 came out about a year after Captain Atom’s last adventure, with Amazing Spider-Man #1 following in early 1963. He would remain on that instant smash hit series for thirty-eight issues, but trouble started after the title’s second year. After Amazing Spider-Man #25, Steve Ditko stopped talking directly to Stan Lee entirely. This was a bit of a problem, as they ostensibly worked together on Spider-Man and Lee was still Ditko’s boss. This tense state of affairs would last thirteen issues before Ditko abruptly and unceremoniously quit.

But far be it from Ditko to act against his own enlightened self-interest! No sir, shortly before leaving Marvel Comics, he had returned to Charlton. Captain Atom #78, taking over the numbering of an older series, debuted at the end of 1965 with brand new stories from Ditko.

By this time, the superhero revival was in full swing and Captain Atom was unashamedly part of it. Ditko pit Allen Adam against new super-villains like The Ghost, Dr. Spectro, Punch & Jewlee, and The Fiery-Icer. Ditko also fleshed out Charlton’s roster of super heroes: first, superpowered secret agent Nightshade made her debut in Captain Atom #82. Since Ditko infamously hated team-up stories, it is odd that Nightshade was initially Captain Atom’s partner before graduating to her own back-up feature in issue #87. The iconic Ted Kord version of Blue Beetle debuted as a back-up feature in Captain Atom #83 before graduating to his own series after #86.

Ditko massively revamped Captain Atom with #84. That ish saw Allen Adam captured and publicly unmasked by crooks while, coincidentally, the government was devising a new method for controlling his radiation – one that would allow him to go out without his protective suit by injecting a liquid metal costume under his skin. One pulse of power and it would jump to the surface, stabilizing his radioactive powers and ensuring they were only a danger to those that did evil. It was a whole new status quo for the Atomic Ace! 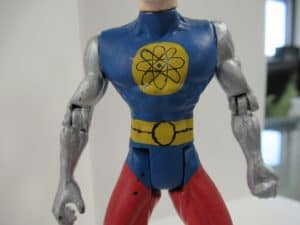 Detail shot of the hand-drawn belt and symbol on the custom figure.

Which is why its a shame that the series was cancelled after issues #89. That said, it would be carried forward in Allen Adam’s appearances in Charlton Bullseye, Americomics Special, DC Comics Presents, and the Crisis on Infinite Earths.

“But wait” you ask, “aren’t there actually quite a few Captain Atom action figures?” Well, yes and no. Captain Atom has received figures from various DC Comics toylines over the years – Justice League Unlimited, DC Infinite Heroes, Young Justice, and even a couple DC Direct figures based on various stories. The hang-up is that they’re almost all DC’s version of the hero, Nathaniel Adam (or Adams, depending on the continuity). DC’s Captain Atom is considerably more powerful than Charlton’s, able to near infinitely absorb energy and even traverse time itself. The Charlton Comics stories explicitly exist as his government-manufactured cover story to hide his true origins from the public. As is the DC nigh-omnipotent character inspired by Allen Adam, Watchmen’s Doctor Manhattan.Allen Adam is powerful, but ultimately “just” an atomic powered match for Superman.

The only Allen Adam figure ever produced came in 2010, as part of the fourth series of DC Direct’s History of the DC Universe line.If you’re a Charlton fan who’d rather have a figure in scale with your Kenner DC figures, or who just appreciates the kind of loving craftsmanship only a fan can provide, you’ll need our custom action figure collection. And If you’ve got collection like our Custom Action Figures – be it original art, garage kits, convention sketches, whatever – and want to bring it to market, get in touch!