What Is The Beatles’ “Butcher Cover”? 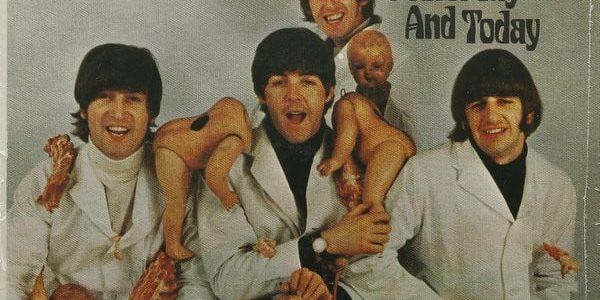 Welcome back to Consigned, Cool, & Collected! Every Monday, the collectibles experts at Back to the Past show you something that caught our eye in the last week. This can be anything under our roof, and we explain the history of the item and/or its place in pop culture. This week, we’re looking at The Beatles 1966 album Yesterday And Today and the place its cover holds in collectibles history. 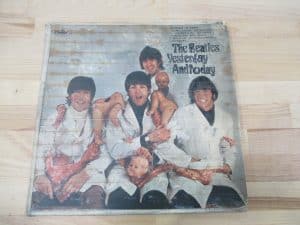 A peeled copy of the Butcher cover, coming soon to auction.

Between releases on different labels and rearranged and renamed albums in the U.S., definitively enumerating Beatles albums can be…challenging. This article will refer to the U.S. release order, for simplicity’s sake.

Yesterday and Today was The Beatles’ twelfth release in the United States. Due to the band’s massive success and Americans’ preference for shorter albums, Capitol had reshuffled track listings, compiled singles, and re-released juvenilia to produce more releases with fewer tracks. Not that The Beatles weren’t highly productive in the early to mid-sixties, but three to four records a year is a bit much (even Prince didn’t sustain volume like that very long).

Yesterday and Today was such a compilation album. It included tracks originally recorded for Help!, Rubber Soul, and the then-upcoming album Revolver, plus the single exclusive tracks “Daytripper” and “We Can Work It Out”. Suffice it to say, the record feels pretty stitched together, but only because that’s exactly what it is.

The Origin of the Butcher Cover 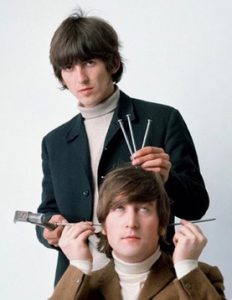 Another photo from the same shoot that yielded the Butcher Cover’s image.

On March 25, 1966, The Beatles attended a photo session with Robert Whitaker. His goal with the session was assemble a series of photos that would be “a considered disruption of the conventions surrounding orthodox pop star promotional photography”. Ultimately, this boiled down to him assembling a random assortment of somewhat gruesome props (dentures, glass eyes, a hammer and nails, and even raw meat) and having the band interact with them.

For their part, The Beatles were game. Their newfound fame was immensely tiring, so a chance to goof around instead of taking the standard promotional shots was a welcome respite. This culminated in the group donning white butcher’s coats and posing with a mix of raw meat and disassembled baby dolls. The overall effect is that one of the most popular bands with the youth of the English-speaking world had happily butchered some babies. It’s more in line with what you’d expect out of Frank Zappa and the Mothers of Invention than from the Fab 4, at least in that era.

Selection of the Butcher Cover

John Lennon and Paul McCartney chose the butcher image for the album’s cover. This was contrary to Whitaker’s vision, but John & Paul felt it served as the band’s artistic statement on the Vietnam War. Fans, however, have more often interpreted it as a commentary on Capitol’s treatment of their music. Looking at the composition of the record, that interpretation makes quite a bit of sense. 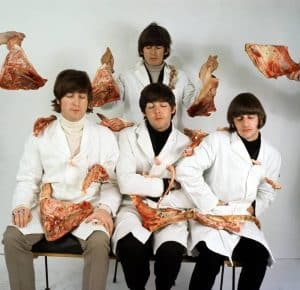 The Beatles posing with the raw meat but without the baby dolls.

Even within Capitol Records, the chosen cover was divisive. The label’s president opposed it while the art director loved it. Ultimately, that plus Paul McCartney’s insistence lead to its final selection. Capitol Records printed up 750,000 copies of the album featuring what would come to be known as The Butcher Cover.

Sixty thousand of those copies, or 8% of the run, were sent out across the U.S. for promotional purposes. They went to reviewers, DJs, merchandisers, and other folks key to the promotional of music at the time. People who were, by and large, older than either The Beatles or their demographic. They hated the cover and backlash was swift. Radio stations refused to play it, stores refused to stock it, and it was derided as disgusting and crass.

Five days before the release date, Capitol Records embarked on Operation Retrieve. They ordered all copies shipped out, whether as previews or for distribution, sent back to them. A new cover, Capitol’s more anodyne original preference, was printed up as a sticker and carefully applied to all extant copies of the record. Future runs would just have the new cover printed up. The record was ultimately released five days late, on June 20, 1966. 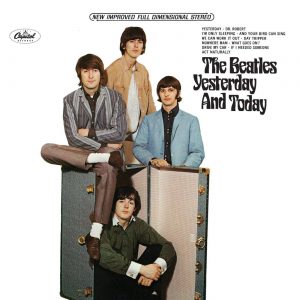 The final compromise cover for Yesterday and Today.

The Butcher Cover as a Collectible

Naturally, some copies of Yesterday and Today had made it too far down the supply chain to be effectively recalled. It was the 60s, after all, and email blasts weren’t yet a thing. Some record shops missed the memo entirely and put the Butcher Cover version out for sale on June 15 as originally scheduled. This small number of copies are highly prized collectibles, with John Lennon’s personal copy having sold for $250,000 – the same amount of money it cost Capitol Records to change the cover back in the 60s!

An even larger number of copies went out with the Butcher Cover stickered over. Once fans found that out, it became a popular thing to carefully peel the sticker off to reveal the banned artwork underneath. This is not an easy or harmless process, as Capitol Records didn’t want you to do it. The chances of damaging the sleeve are high, though artfully removed stickers can be dang close to unmolested copies. A peeled copy is what we’ve got coming soon to auction.

What looks at first glance like a damaged record sleeve could be a peeled treasure! Or perhaps the somewhat dead-eyed stare of The Beatles as they lean on a steamer trunk conceals one of the most highly prized record sleeves in Beatles collecting. Subtle nuances like that are why it pays, often literally, to let experts like Back to the Past handle selling your collection. We know what we’re looking for, and we sing its praises every Monday here in Consigned, Cool, & Collected.