I Will Tell You #13: No Hard Feelings 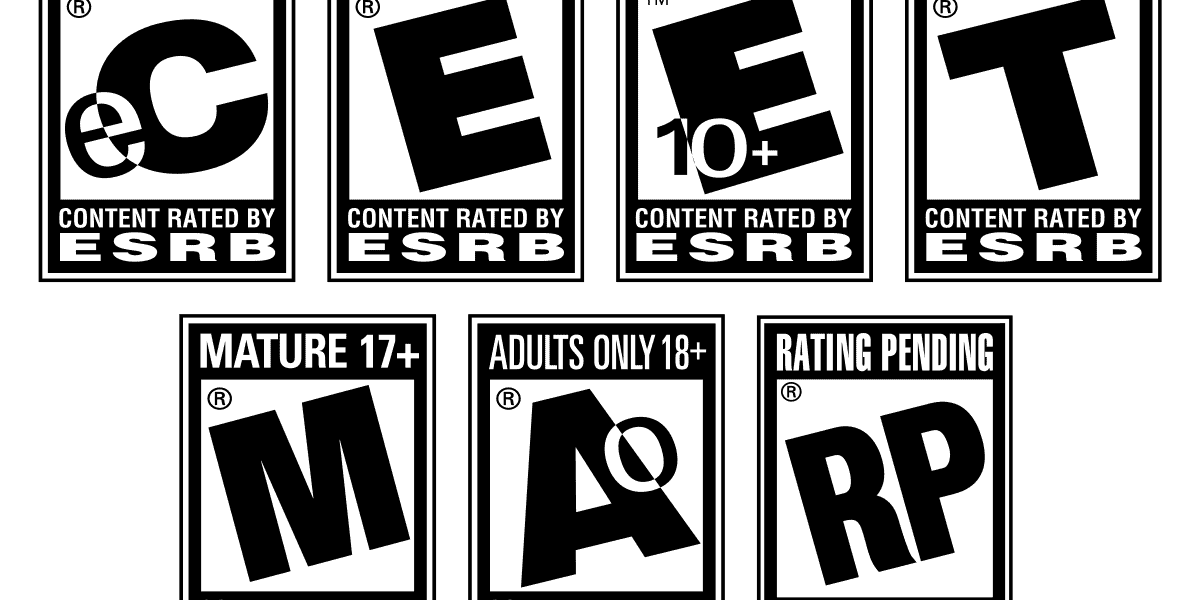 Last week, as you’ll remember, I took a shot at the new ratings system set to be implemented by DC Comics in the wake of their dumping the Comics Code Authority. I also jabbed Marvel Comics’ own system, which has been in use for a decade but is different from DC’s, which in turn is similar but not identical to the one used by the ESRB (Entertainment Software Rating Board) for rating video games. And so I then took a poke at all of the confusion that could ensue when mindful parents actually try to sort out these varying guidelines, assuming that they even try to in the first place. And then I blasted rating systems in general, citing that anything less than a universal structure is unworkable but that such a system is nigh impossible to create when considering the varying tastes and tolerances of a large populace. And then, I ripped on the very idea of the few presuming to dictate what should be reasonable to the many; of trying to put labels on things like sex, violence, and profanity that try to tell all of us collectively just which ones are OK, how much of each is acceptable, and whether the intensity and frequency of each is tolerable.

Well, no hard feelings. I suppose I was in a rather testy mood last week, but I get that way when someone thinks they know what’s suitable for everyone else. With all that jabbing, poking, and blasting, I guess that column wouldn’t have been able to muster a “G” rating, with such excessive violence. Or would that be an “E” rating? Or “ALL AGES”? 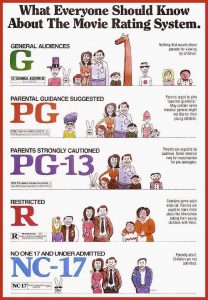 Anyway. For the longest time, when a film was released, the MPAA would slap a rating on it, with absolutely no public explanation as to what made said film garner such a rating. If a movie were rated “PG”, well, then, it must contain something bad, right? Perhaps some violence. Or maybe a dirty word, possibly two. Or possibly a quick glimpse of a lady’s exposed backside. No one could really be sure. Everything that They deemed potentially objectionable got lumped together. And all these ratings really came to mean was that They said certain people shouldn’t see it. It was the cinematic equivalent of selling milk in a carton, butter in a tub, and cheese in a wrapper, but just labeling all three of them “Dairy Products”.

The discussion can go no further without bringing up the dreaded C-word. No, not that word, which would test the limits of any ratings system. What’s the C-word I speak of, you ask? I will tell you, if you haven’t surmised already; that word is Censorship, a topic frequently and heatedly debated in comics circles for a very long time. For there have always been those that have equated a ratings system with censorship, clinging to the misguided idea that providing information regarding the contents of a comic, movie, book, etc is somehow tantamount to altering it. Or banning it entirely. Like the wonder of atomic energy being used for destructive purposes, product ratings have been used by censors as tools to justify their own ends, but the ratings by themselves do nothing to change the content of a product or dictate what happens to it once it’s distributed.

In recent years, the MPAA at least has gotten a little more open with their reasoning, even if the arbitrary nature of the judgment remains. If a film gets a “PG” rating, at least there some keywords tacked onto the fine print to give it some kind of useful explanation. Brief descriptions such as sci-fi violence, brief nudity, and mild profanity go a lot further into revealing the nature of a film’s content than a label ever could.

And wasn’t this the intent all along? To inform potential consumers as to just what it is they’re about to consume? Such descriptions, however brief, do far more to allow potential buyers to make an educated decision, and make a boiled-down rating symbol unnecessary. Such a symbol might fit nicely on the corner of a movie one-sheet or cover of a comic book, but ultimately they’re better poised to create more problems than they solve. It’s better to just simply list the ingredients, rather than judge them behind closed doors and then keep them a secret until the product is consumed.

When an innocent-looking but nonetheless inappropriate comic falls into the hands of the wrong person, it’s an act that’s often taken as a declaration of war by those who are ignorantly neutral or decidedly biased against comic books. On one side of the battlefield, are the creators and publishers knowingly putting out these products that are decidedly if not overtly intended for a specific audience. On the other, are potentially reactionary detractors who, if nothing else, have enough power to give the industry bad press it definitely doesn’t need. And in the middle, on the front lines, are the retailers, who are expected to screen every new release that comes into their stores, properly presume what’s acceptable to whom, and then take the brunt of every irate consumer who unwittingly purchases a comic that apparently wasn’t what they thought it was going to be. 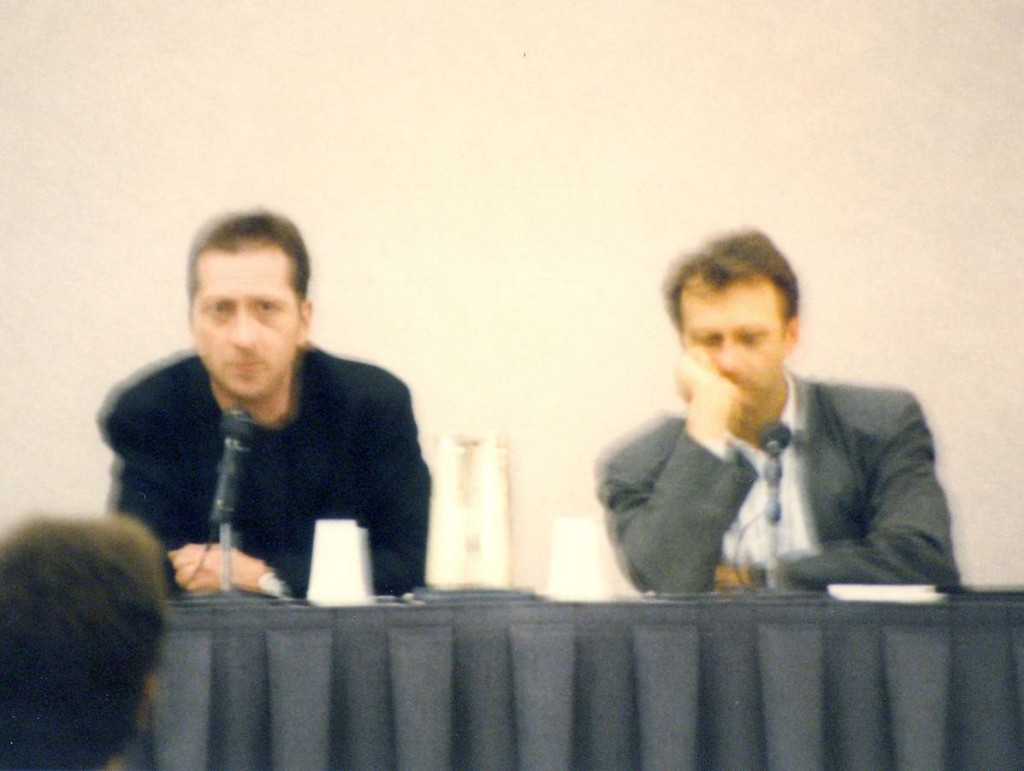 Frank Miller and Gary Groth sit as patiently as they can at a Retailing & The 1st Amendment Panel at the ’96 SDCC. Eventually tiring of fielding pro-censorship arguments, Miller settled for repeatedly exclaiming “It’s stupid!” near the end of the panel.

With great freedom, comes great responsibility. Like the right to free speech, and the right to bear arms, the right to freely create and publish also includes the right to deal with the consequences of such. Many free speech advocates like to believe they can say whatever they like with no consequence, but our Constitution only guarantees the first part of that. Personal freedom doesn’t preclude a good punch in the face as a possible response. Only with comics, it’s not the publishers getting punched in the face, it’s the retailers. Publishers don’t go to jail for publishing; but retailers have gone to jail for selling.

To think that anything can be published without giving some indication as to its contents is foolish, at best, and selfish, at worst. It’s always easy when it’s someone else’s head on the chopping block. No, it’s not that it’s easy; it’s cowardly. If you’re a creator or a publisher, and you’re proud enough of your work to put it out there for the world to see, then show it by telling everyone what it is you’re wanting them to buy, instead of lobbing it over the wall like a grenade and sitting pretty in your bunker with your fingers in your ears when it goes off. And if you think that such disclosure somehow constitutes censorship, then remember that when you’re perusing the ingredients on some canned goods at the supermarket.

In fact, come on over and discuss it; I’ll make dinner. But, I won’t tell you what it is, and I won’t tell you what’s in it, but I’ll fully expect you to eat it. And if you have some kind of reaction from it, well hey, it’s not my fault. You shouldn’t have eaten it, then.