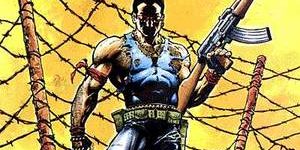 This week I bring to your attention Dark Horse Presents # 1 published by Dark Horse Comics in July 1986.  It’s an anthology book, the first in a series that ran for one hundred and fifty-seven issues, plus a number of annuals and the Fifth Anniversary Special that introduced the world to Frank Miller’s Sin City, but that a story for another day!

This first issue introduces the reader to three new characters, plus another one-shot character.  The three continuing characters are/were Black Cross, (who was cover featured) a solider of fortune,  Mindwalk, a story about a team of individuals who can “walk through the minds of others”, think Inception here, but twenty-five years earlier and the third featured character is Concrete.  The introduction of Concrete is the real reason for this Retro Review!

Both the story and the art is by Paul Chadwick, recently coming off an assignment as the artist on Marvel Comic’s Dazzler!  This black and white, gem of a story, is entitled: “Lifestyles of the Rich and Famous” and it introduces us to Concrete, in a short eight page story.  What exactly Concrete is, is not revealed in this first storyline, and actually is revealed slowly throughout the run.  The story begins with Larry reading Concrete’s mail to him, as his fingers are not made for opening small and fragile things, such as envelopes.

People have apparently begun to write to Concrete to convince him to act on their behalf after he has appeared on television, which has taken place prior to the start of the series.  For example, one letter writer wants Concrete to appear in a protest rally and offer “Passive Resistance” and to act in the efforts/cause of social justice.  Concrete asks Larry to start a file of possible future actions they put this letter in that file.  Another letter is from a woman who thinks Concrete is … “Hot” and even sends a “racy” photo of herself.  Concrete decides he’ll deal with this letter and photo personally, in the near future.  Another is from a woman who’s husband is battering her and asks Concrete for his help.  He refers her to a local Woman’s shelter and provides her a phone number, but decides that sending money is not the kind of help she needs.  Another letter is put in a newly created “Hostile Nuts” folder, etc.

Finally, Larry reads a letter from a lady willing to pay Concrete $1,500 to mingle with her party guests.  The party is Saturday and he decides to accept the invitation and the payment.  Saturday arrives and Larry drive Concrete to the address of the party.  Concrete hears noises from around the back and goes around the house, only to discover that he’s at a kid’s birthday party!  His hostess explains that she can’t afford his services, but hopes he’ll stay since the kids are so excited and hopes that he’ll be a good sport about things!  She tells him that last year she “tricked” John Ritter into coming and that he ended up having a wonderful time. 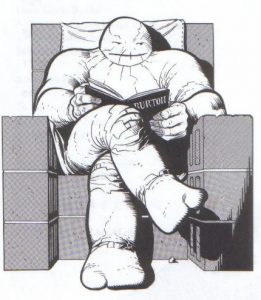 Concrete relents and enters into the fun with the kids.  And  a great time is had by all, including Concrete!  Larry even gets to eat cake and ice cream while Concrete is entertaining the kids.  All the children get their pictures taken with Concrete and he exclaims that he’ll “never forget” this day, and as he leaves, he also says that he doesn’t imagine his hostess will either.  Which sets up the last panel wonderfully.  I won’t give it away, but it’s truly priceless and I agree with Concrete completely, Mrs. Grace will surely never forget Concrete’s visit!

The comic cost $1.50 back in 1986, and for the Concrete story alone, it is well worth the admission price.  In fact, I don’t have anything good to say about the other stories in the comic, so I won’t!  Because the Concrete story is only eight pages, and the other stories are not worth the paper they ‘re printed on, I can only give this comic two (2) out of five (5) Legion Flight Rings.  But it’s a wonderful start to a new series featuring Concrete, who would go on to star in his own comic series from Dark Horse.