Is There Value In Obscure Comics? 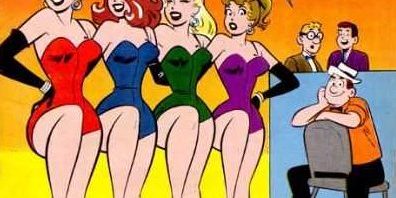 Welcome back to Hammer Drops! Each week, we illustrate what we’ve learned in thirty years of selling collectibles using examples from our recent auctions. This week, our attention is drawn to an unexpected result from our December 11 auction session. Imagine you were presented with three comics. Two are among the most iconic Spider-Man issues of all time. One is a little known humor team-up title from the 50s. Which would you guess realized the highest price at auction?

Who Are Atlas Comics’ Showgirls? 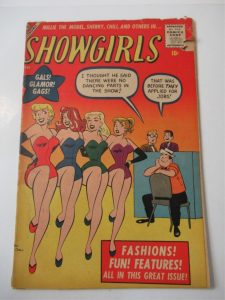 Showgirls #1 was released by Atlas Comics, immediate predecessor to Marvel Comics, in 1957. The skids that Marvel was in prior to the introduction of the Fantastic Four had not yet been hit. As such, Atlas Comics was publishing a wide array of titles across a variety of genres. One of their most successful genres was the romantic comedy, including titles like Millie The Model (and its sister series A Date With Millie) and Sherry The Showgirl. While similar in formula to the teen romance antics of Patsy Walker and her pals, these titles were about adult women. As such, the art could get away with being a bit saucier – as saucy as the newly minted Comics Code Authority would allow, at any rate.

The artist on these saucier romance tales was one Dan DeCarlo. Although most strongly associated today with Archie & pals, DeCarlo’s earliest major successes were at Atlas Comics. He drew Millie The Model for ten years, with Stan Lee as writer. That atypically long partnership lead to the creation of spin-offs and in-house rip-offs. During this same period, DeCarlo was drawing Playboy-esque pinup cartoons wherever he was allowed. Though his style is most strongly associated with the anodyne world of Archie Comics, there’s a reason that Bruce Timm cites him as a strong influence.

Showgirls saw Lee and DeCarlo bring together Millie The Model and Sherry The Showgirl as the leads in a troupe of dancers. It featured a mix of the headliners and their supporting casts, basically a team book of vaguely titillating humor titles. It did not prove much of a success, lasting only two issues. That said, Marvel’s original superhero team, the All-Winners Squadron, hadn’t done any better.

The Lesson: There’s More To A Valuable Comic Than A 1st Appearance

Millie and Sherry are not recognizable names. Even dedicated Marvel Comics readers probably don’t know them, especially if they aren’t in their sixties. They’re not what propelled this book to $425. No, that honor belongs to Stan Lee and Dan DeCarlo.

Thanks to the Marvel Cinematic Universe, the majority of the American public know just how influential Stan Lee was. There’s no need to go over it in detail, other than to say that his co-creations have generated more interest and revenue in the last week than that of any other creator. In any field.

And Dan DeCarlo? Picture Archie Andrews. If you didn’t picture Riverdale, then you almost certainly pictured Dan DeCarlo’s art. His style was the Archie Comics house style for decades. He created Josie & The Pussycats. He co-created Sabrina The Teenage Witch. While it requires a certain amount of comic knowledge, Dan DeCarlo effectively is Archie Comics in the popular consciousness.

And Showgirls #1? It’s those two legends working together. On a first issue, a highly valued commodity these days. In 1957, before the modern collector market had formed. And being a bit naughty to boot! Considering all those factors, its not actually that surprising that this particular comic rose to the top.

Showgirls #1 is the kind of comic book that the untrained eye can easily overlook. It’s a short-lived, largely unknown series with Archie Comics-esque art. Archie Comics, though fun, largely aren’t that valuable. Experts like the staff at Back to the Past have the tools and talent to catch something like this book. Our job is to put them to work for you! And to share them with dedicated DIYers every Wednesday in Hammer Drops.