Me Fail English? That Unpossible! (or “Finding The Right Keywords”) 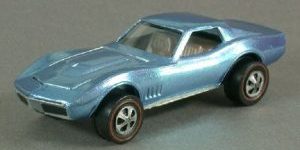 Welcome back to Hammer Drops, where we share the tips and tricks we’ve learned in 30 years of selling collectibles with you, our adoring audience! This week, we’re looking at the importance of finding the right keywords when trying to sell or appraise items online.

Hot Wheels are deep into the category of “Value Varies Wildly”, being as they are tiny, inexpensive, and have been produced continuously since 1968. Some are rare, many are not, and (of course) the older they are, the better chance you have of finding more serious value.

Hot Wheels cars from the line’s infancy, 1968 to 1977, are distinguished by having a red line on the wheels. So we try “Vintage Hot Wheels Corvette Redline” and dollar signs start racing through our head – this thing sells for hundreds of dollars! Except it doesn’t.

A very similar looking model called the “Custom Corvette” was part of the line’s original Sweet 16, and it’s that car that goes for the big money. This car is the “Corvette Stingray” from 1976. Assuming we don’t know names but can read copyright dates, “Vintage Hot Wheels Corvette Redline 1976” shows that this bad boy tends to top out at around $20 –  a nice value for a Hot Wheels car, but a far cry from the $400 the original Custom can fetch.

A big thanks to Pete Johnson, our General Manager and the Riker to Scott’s Picard, for suggesting Redline Hot Wheels to use as the example!

This isn’t to say that the right keywords guarantee you success, and we offer up our recently sold ALIEN LV-426 Cage-Free Eggs set as an example. The Alien franchise, predating the Internet’s widespread use by more than a decade, has generally terrible SEO – it’s a common word and the sequel just pluralized it. So we added “Blind Pack”, “2011”, and “SEALED” to help describe the item, with “Facehuggers” and “Fox” (as in “20th Century Fox”, the studio that owns the franchise) to help specify the series in the limited number of characters available to us. The item sold fairly quickly, and was winging its way to the other side of the world before a problem arose.

It turns out that by name-checking the studio as a keyword, our toy Xenomorph eggs had come up in a search for fox bait. And because the sealed blind-pack didn’t exactly make the contents visually explicit and was priced (apparently) very cheaply for fox bait, it was purchased by someone with a fox problem that wasn’t reading too closely.

A deeper dive into that particular return request might be a post for another day (something like “The Exciting World of Customer Service”), but the point is things can go wrong even when you hit the right keywords! You may someone who enjoys doing the research, listing the items, and handling the customers yourself, but if you’ve got a large collection or running your own store doesn’t sound appealing, contacting the experts here at Back to the Past to do the heavy lifting can save a lot of headaches.

We’ll see you back here in two weeks for more tips and tricks from Hammer Drops!