Motor City Comic Con Welcomes Plenty of New Guests, and Some Familiar Ones 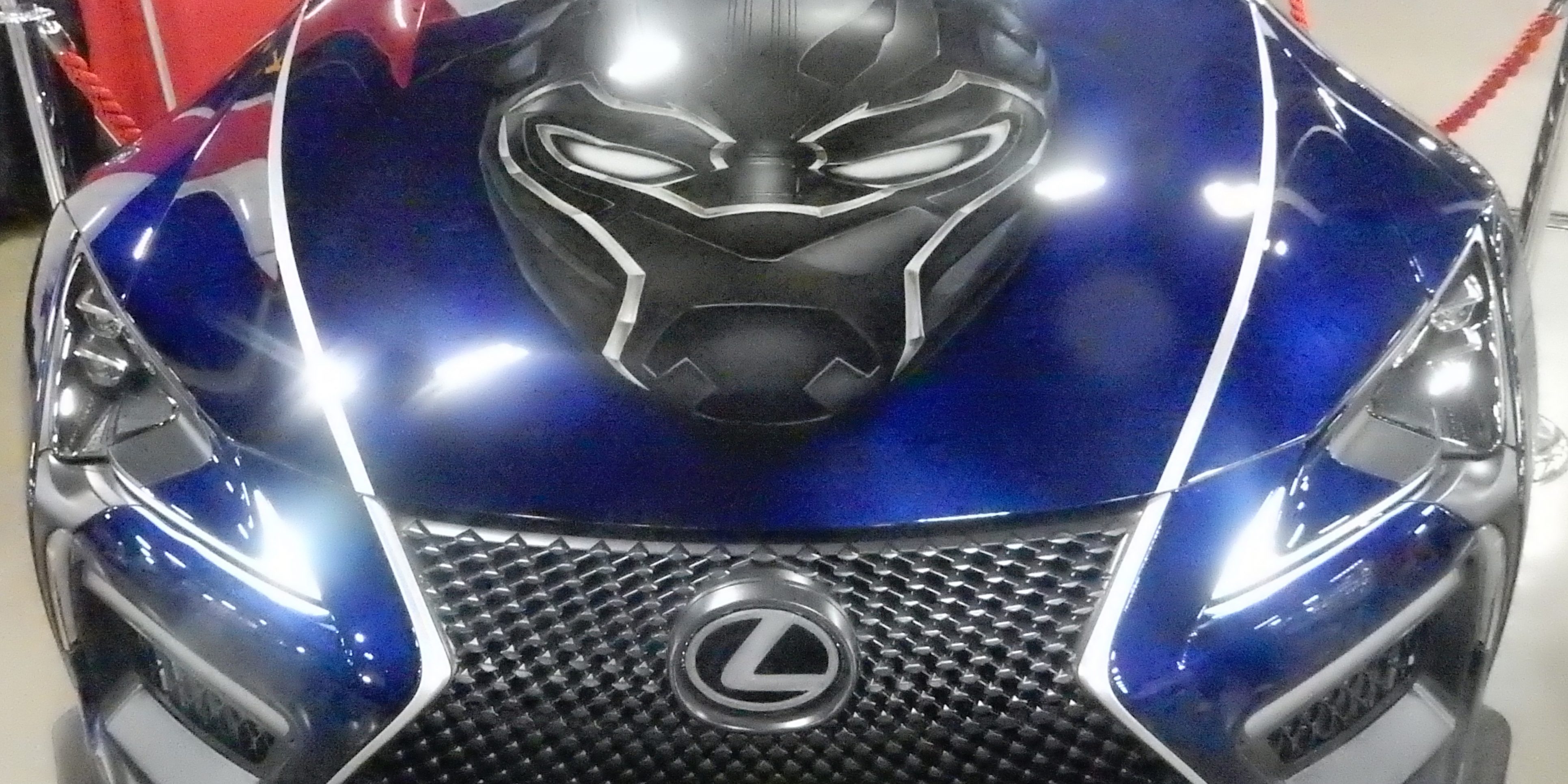 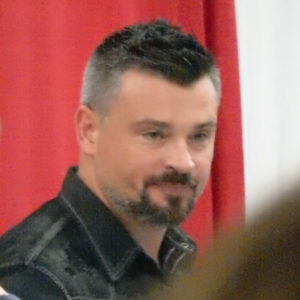 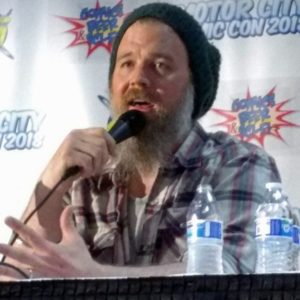 One first-timer included actor Ryan Hurst (Sons of Anarchy, Remember the Titans), who spoke positively about his experience at his rookie Motor City Comic Con. Hurst had originally been scheduled to appear at the show three years ago, but ultimately had to cancel due to a scheduling conflict. In his Friday afternoon panel, Hurst answered questions from fans and shared some anecdotes from his time on Sons of Anarchy, and also teased some of his upcoming projects.

The actor is scheduled to appear in two films next year – Sam Taylor-Johnson’s drama A Million Little Pieces, and one other Hurst couldn’t disclose. Hurst also teased a possible upcoming role in AMC’s The Walking Dead, although when pressed later for details, stated “forget I ever said that!” 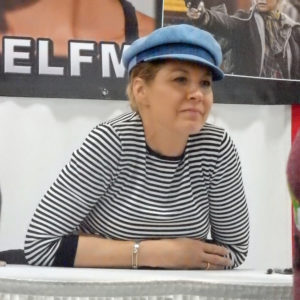 Fear the Walking Dead welcomed Jenna Elfman, and so does MCCC.

The Walking Dead’s companion series on AMC, Fear the Walking Dead, recently added Dharma & Greg’s Jenna Elfman to the cast for its fourth season, giving fans another reason to welcome her first appearance at Motor City Con. The con has long welcomed members of The Walking Dead cast among its featured guests in past years, and Elfman’s appearance ensured that streak continued, after the cancellations of show stars Alanna Masterson and Christian Serratos. 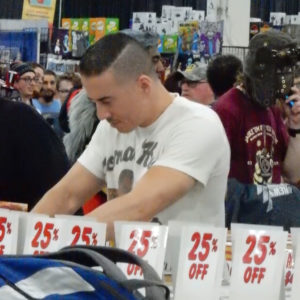 Arrow’s Kirk Acevedo looks for some deals on back issues.

The original Walking Dead series did have cameo representation, though, in the form of actor Kirk Acevedo, another first-time guest who appeared on the show in 2013. Acevedo, in fact, took advantage of his first time at Motor City, strolling the exhibit hall on Saturday and looking for back issues of comic books, just like many of the attendees who had come to see him.

One comic book veteran enjoying his first Motor City Comic Con was artist Tom Grummett, who faced a backlog of fans happy to see him appear in the Detroit area, replete with large stacks of comics seeking his autograph. Grummett remarked that he enjoyed engaging with local fans long awaiting his appearance, but cited the ever-increasing list of sketches that he had to begin working on at some point. Grummett also spent some time in the accompanying hotel lounge after setup on Thursday night, meeting with fellow artists and talking with fans.

… and Some Old Ones 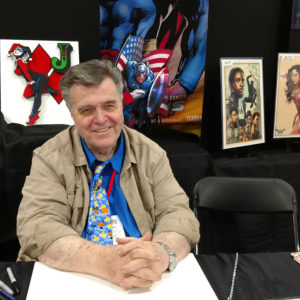 Neal Adams is one of the con’s more familiar faces.

For all the new faces appearing across the convention, there was still no shortage of many of the perennial guests who fans have come to expect to see every year. Artist Simon Bisley remains a fun and welcoming presence, both at the show and in the hotel lounge afterwards. Bisley, in fact, teased a potential upcoming project – a sequel to 3 Floyds: Alpha King, the fantasy mini-series written by Brian Azzarello published by Image Comics in 2016. Veteran artist Neal Adams was set up and ready to sell prints on Thursday evening, before the show’s opening Friday afternoon, and happily did so to interested fellow exhibitors. Artist Tom Raney was another familiar artist returning to the show. 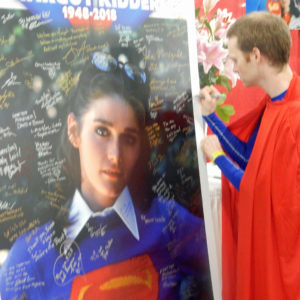 One notable event was the commemoration of the 40th anniversary of Richard Donner’s legendary Superman: The Movie. The Saturday panel included appearances by actors Aaron Smolinski and Jeff East, who played baby and young Clark Kent respectively in that landmark film. Jack O’Halloran, who played the villain Non in the sequel Superman II, also attended. The significance of the panel was somewhat diminished, however, by the cancellation of Sarah Douglas (Non’s fellow villain Ursa in Superman II), and more significantly, by the absence of actress Margot Kidder, who appeared in both films and was scheduled to appear at the con before her untimely death days earlier.

The loss of the beloved Kidder hung over the show, especially at her booth – which the convention still set up, in order to allow fans to pay tribute to her. A large picture of her was displayed in front of her table, and fans were permitted to sign and write out their tribute on Friday. On Saturday, her booth sat empty, save for flowers displayed there in her memory. 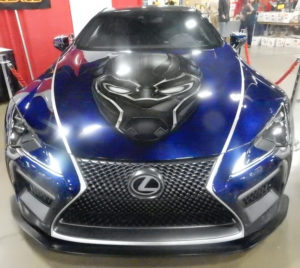 The Lexus LC-500 from Black Panther.

A loss of another type entirely also occurred on Saturday morning – namely, a series of short power outages at the Suburban Collection Showplace. The disruption was reportedly noted with amusement during the Black Lightning panel at noon, where the actors from the show – Cress Williams, Nafessa Williams and China Anne McClain – comedically noted that they had nothing to with the outage. There were no further such disruptions.

And, it’s arguably not a con in the Motor City, without some automotive representation. A special edition of the 2018 Lexus LC500, as seen in the Black Panther film earlier this year, was on display for attendees to admire. No, there were no free test drives being offered.

Both new and familiar faces stand to be featured at next year’s show – the 30th annual Motor City Comic Con has already been scheduled for May 17 – 19, 2019, again at the Suburban Collection Showplace in Novi.

Special thanks to Jill Liptow for the assistance and photo help, and to Dave Marchand for the lowdown on some of the happenings that I missed!