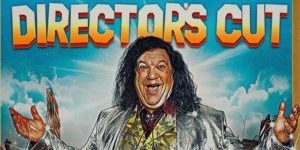 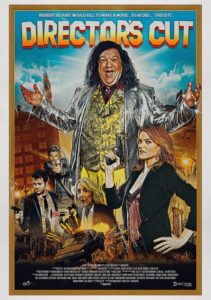 Poster for the Movie

We interrupt your regularly scheduled blogging to bring you…an actual movie review. There’s a brand new horror movie streaming right now and I, being a crowdfunder on it, got a screener copy thereof (I’m going to get physical media when it becomes available). It’s called Director’s Cut, starring and written by Penn Jillette and directed by Adam Rifkin. It is undoubtedly one of the strangest horror films I’ve seen.

Herbert “Herbie” Blount (Penn Jillette) is an awkward, wealthy weirdo who has been obsessed with actress Missi Pyle since he saw Galaxy Quest. Her latest film, an Adam Rifkin directed crime thriller entitled Knocked Off, was a crowd-funded project and Herbie has used his wealth to buy himself almost unrestricted access to the set. Things go badly for the filmmakers from there.

All of that sounds pretty straightforward, right? Well, the movie we the audience gets to see is Herbie’s “director’s cut” of Knocked Off, complete with his commentary. Herbie splices in unfinished sequences, coverage shots, cell phone camera footage (that he took), hidden camera footage, security tapes, poorly green screened footage shot in his basement, and even clips from a reality show in with the finished footage to create his ideal cut of “his” movie. He talks over and fast forwards through important scenes in Knocked Off, makes MS Paint-quality edits to the opening credits, imparts incorrect or misunderstood filmmaking tips/trivia, and generally interprets everything he sees through a lens of crazy. You are, effectively, dropped squarely into the world of the movie by watching it.

Penn has said very openly on his podcast that this film isn’t for everyone, and that it is probably the single most bizarre creative project he’s released to the public in his forty years of working in showbiz (though not the bizarre idea he’s had in that time). Even director Adam Rifkin, who has been working with Penn on this project for five years, says it’s really weird. Teller has a cameo in the flick in a speaking role and that alone would be enough to wig out at least some viewers. 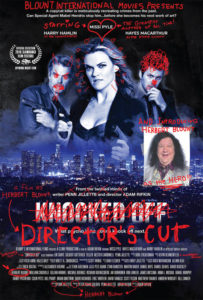 Poster for the Movie, reflecting that its a recut of the fictional movie within the movie.

And I loved the movie. This my happening, baby, and it freaks me out. The bizarre concept is perfectly executed and increases the tension as Herbie’s inappropriate behavior slowly increases from “awkward” to “creepy” to “dangerous”. The fact that the flick does this, that it showcases the escalation of the character’s stalking and deterioration of the situation for Missi Pyle while still being believably from naively hurtful perspective of Herbie is a true testament to the talents of its creative team. The movie is currently available digitally, and I highly recommend you check it out.